Namibia is not nearly as poor as most of its West African neighbors, but it's still not rich (measured by GDP per capita).  It's right in the middle of the rankings, about the same as Egypt and Indonesia.  So I was expecting to find yet another typical third-world country, but I was very pleasantly surprised.  It is impossible, of course, to get the full measure of a country in a day, but Walvis Bay, at least, turned out to be surprisingly civilized.  There was some low-income housing on the outskirts of town, but no shanties, no vendors selling furniture by the side of the road, no animals in the street, no fleets of broken-down taxis, no one pulling carts by hand.  The town of Walvis Bay itself was virtually indistinguishable from parts of California. 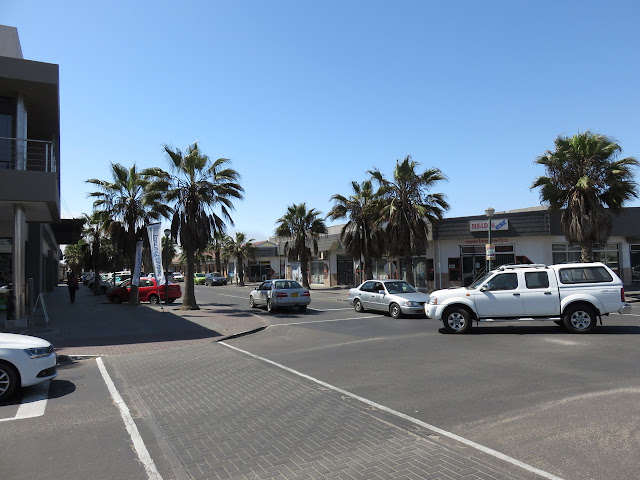 It was at once a relief and a disappointment: western suburbia is comfortable, but it's kind of boring.

Nancy and I went on different excursions that day.  She got to see flamingos: 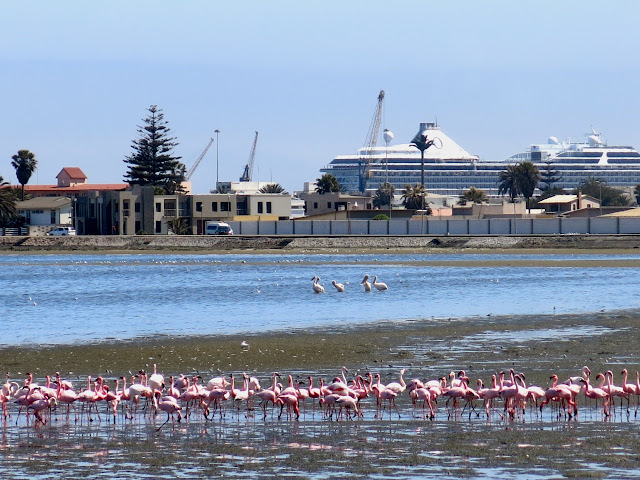 while I went out into the famous Namib desert, to an area aptly named the "Moon landscape": 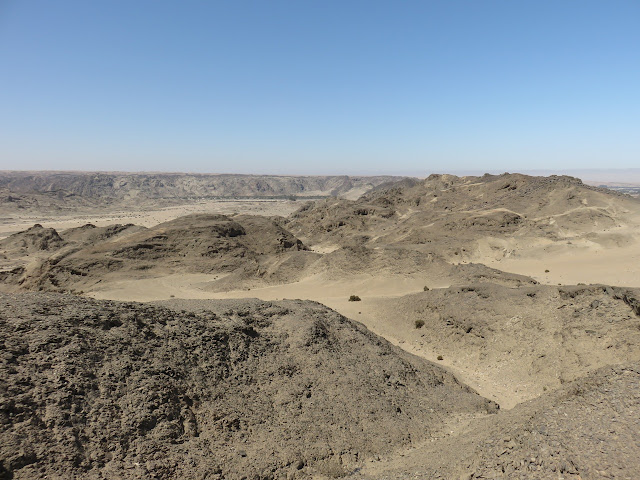 It looks barren and god-forsaken (and it is) but there's actually a lot of interesting stuff going on here. There's some really cool geology: 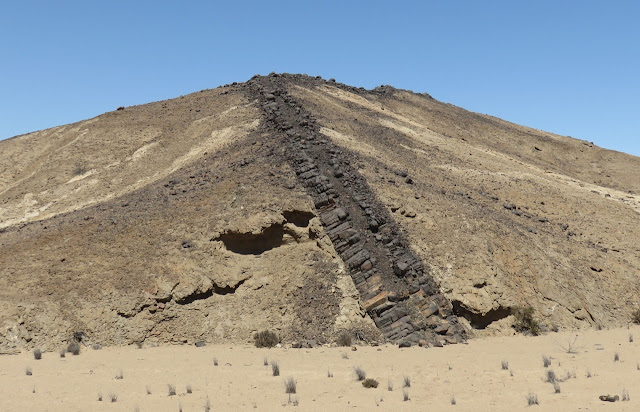 There's some plant life too, if you look closely.  These lichens, for example, are normally black: 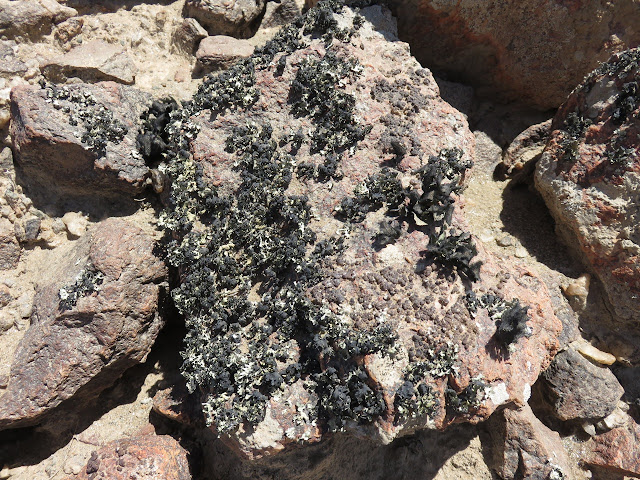 but when they get wet they turn green: 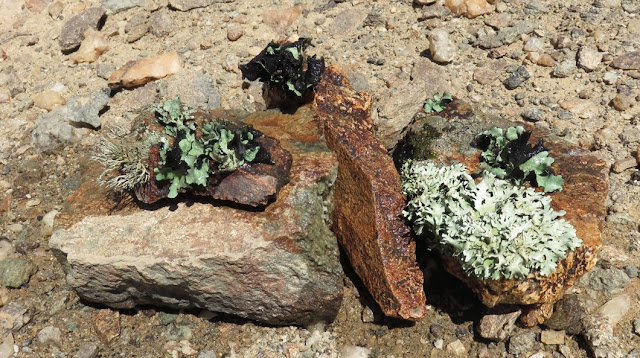 These lichens got wet because we tourists were pouring water on them from our bottles, but normally they get their water from coastal fog that blows in from the ocean about ten miles away.  In fact, when we arrived it was actually raining gently at the coast!

This plant is called a Welwitschia: 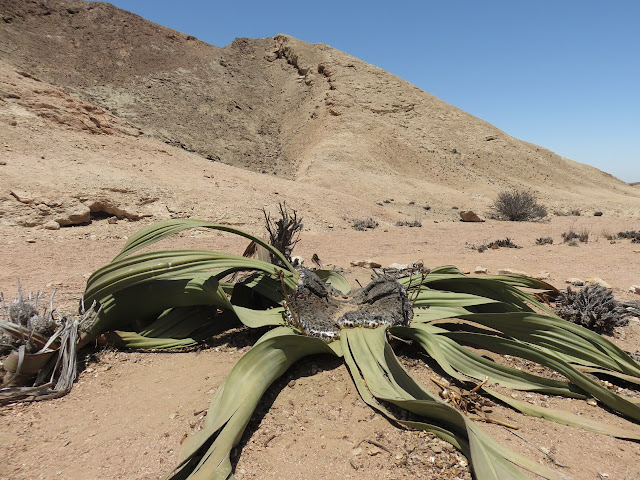 It's actually a tree (closely related to evergreens like pine and spruce), and this one is probably several hundred years old!  It is found only in the Namib desert.

Of course no self-respecting desert would be complete without sand dunes.  The dunes here are so big and persistent that they have names (or at least numbers).  This is dune #7: 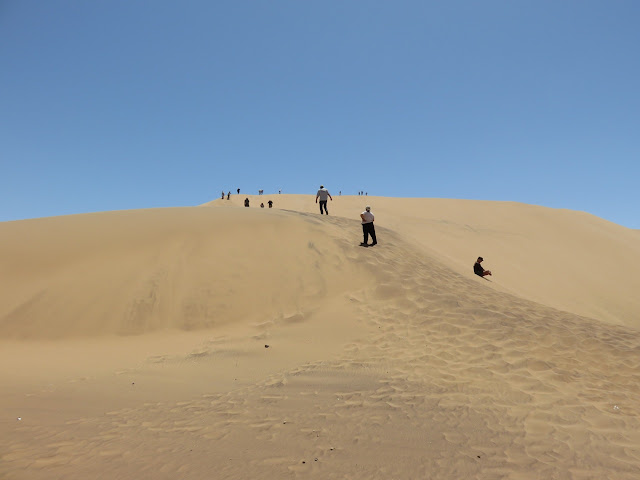 Climbing up was not easy.  Walking was impossible without sinking in up to your ankles.  I tried taking my shoes off, but it was much too hot to walk barefoot so I just made my peace with the fact that my shoes were going to fill up with sand and slogged my way up to the top. 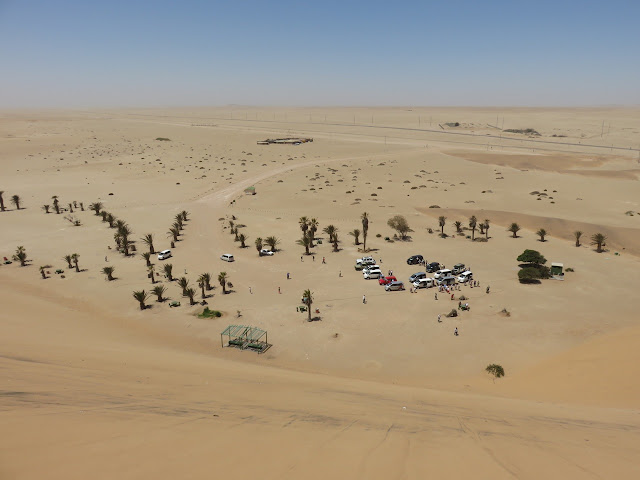 Up there, whenever the sand was disturbed it would flow down the side of the dune almost like water.

Even the art work in Namibia seemed like it was of higher quality than the rest of Western Africa.  Most of the art we've seen in Africa is wood carvings, but here in Namibia we found a lot of really beautiful and intricate stone sculptures: 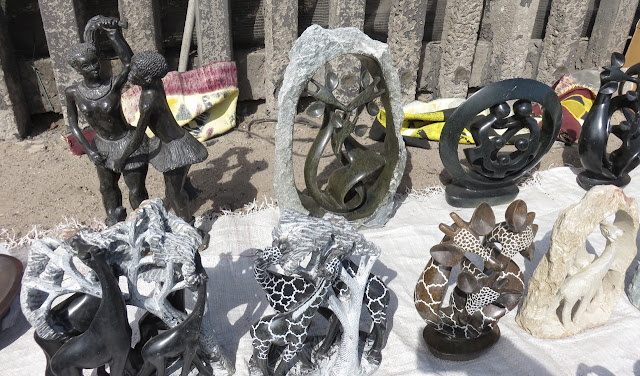 There must be some poverty in Namibia somewhere, but they did a really good job of hiding it from us.