Getting to Victoria Falls was quite the adventure.  From there we were going on a Safari in the Okavango delta, so we had to reconfigure from cruise-ship mode to safari mode, i.e. a mode where we had a lot of space to put stuff and we didn't have to repack every day to a mode where everything we needed for two weeks had to fit inside a single small duffel bag that would fit in a small plane.  Arrangements had been made to store our excess luggage, but there was some confusion over the logistics.  To make things worse, one of our bags got damaged during the transition and the handle wouldn't retract.  Fortunately it turns out that airlines deal with this sort of thing all the time, and so it all got sorted out, but not before I had accumulated about a year's worth of stress in two hours.

When we finally made it to Vic Falls it took forever to get through immigration.  You have to buy a visa at the airport, and there was a Japanese family who had cut into line ahead of us that had some sort of problem that took forever to resolve.  There were half a dozen immigration agents behind the counter, but it apparently never occurred to any of them to shunt this family off to the side so that the rest of the people in line could be processed.  I learned that there's a local expression for such situations: TIA: This Is Africa.

Victoria Falls is both the world's largest waterfall and the name of the adjacent town in Zimbabwe.  The falls themselves mark the border between Zimbabwe and Zambia, and the town on the Zambian side is called Livingstone, after the British explorer who discovered the falls in the mid-1800s.  In doing the research for this entry, I found this interesting passage on the Wikipedia page for David Livingstone:

The expedition lasted from March 1858 until the middle of 1864. Expedition members recorded that Livingstone was an inept leader incapable of managing a large-scale project. He was also said to be secretive, self-righteous, and moody, and could not tolerate criticism, all of which severely strained the expedition and which led to his physician John Kirk writing in 1862, "I can come to no other conclusion than that Dr. Livingstone is out of his mind and a most unsafe leader".

We stayed at the Victoria Falls Hotel.  It dates back to 1904, but none of the original construction survives, and the current physical plant only goes back to the 1980s.  But they've done a nice job of keeping the old-school feel.

Vic Falls is in the middle of nowhere, and there is a lot of wildlife that freely roams all over the town including the hotel grounds. You almost don't have to go on a safari after staying here. 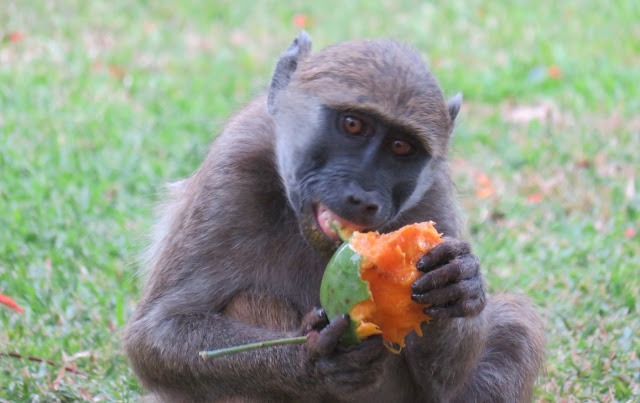 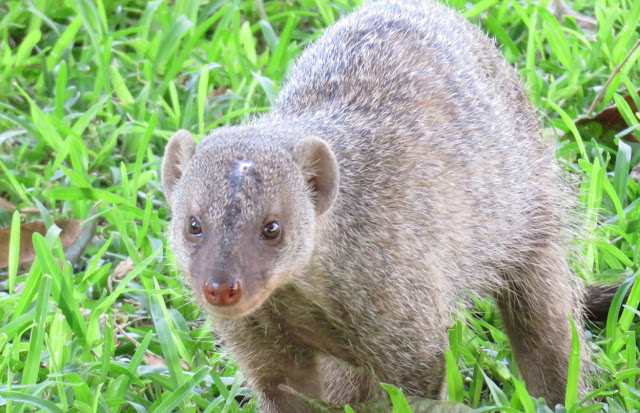 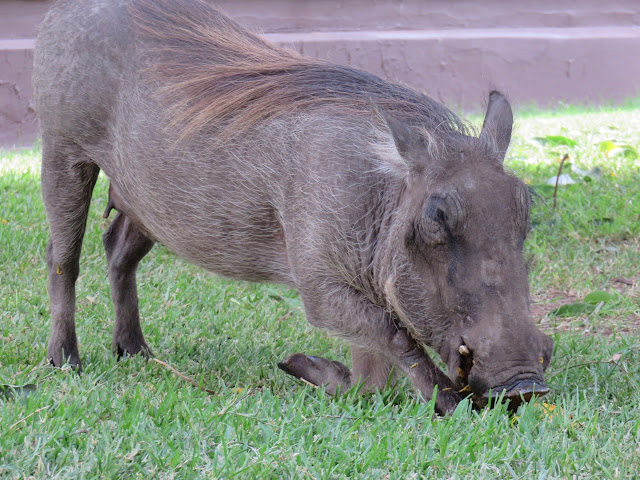 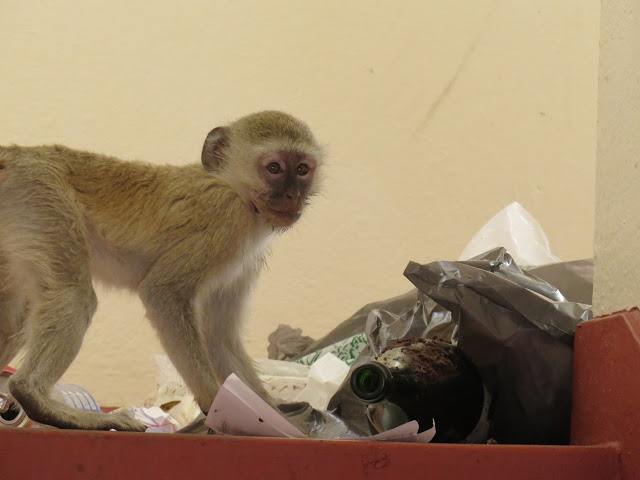 That's a baboon, a banded mongoose, a warthog, and a vervet monkey who has gotten into the trash and made a horrible mess.

We also went on a lion walk, where you hang out with lions who (they said) were being raised in captivity for eventual release into the wild.  They had been acclimated to humans, but were allowed to hunt so they would not become fully domesticated. 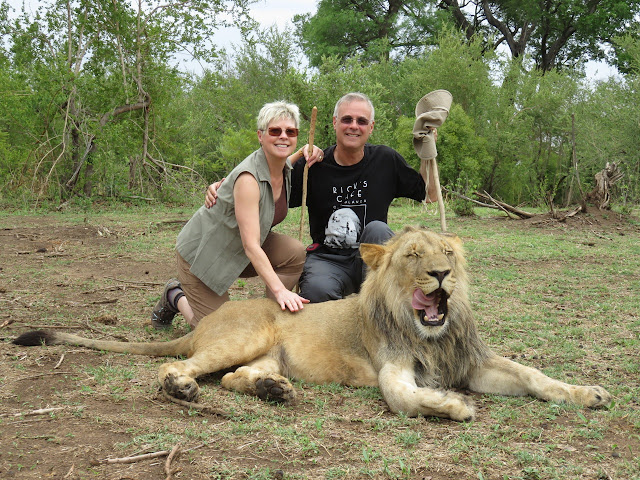 We found out after the fact that these programs are very controversial, and their record of actually releasing lions back into the wild is not good.  Indeed, it is not even clear that this sort of program is necessary at all.  One knowledgable source told us after we got home:


The problem is that the operators are completely misleading travelers (and even their own staff) about the purpose of their operation, and there is no conservation benefit at all from what they are doing. There is no need for captive bred lions anywhere in Africa – the problem is a lack of habitat, not a lack of lions (lions are prolific breeders and will very quickly establish themselves naturally in an area where they can survive). Every suitable piece of habitat on the continent is already occupied by lions, and none of these organizations involved with captive bred lions has any record of ever having relocated a lion to a National Park or other conservation area.

Still, I would like to think that programs like these have enough value in raising awareness to justify their continued existence.  The experience of getting this close to these animals was very profound.  We were also able to get some awesome close-up photos that we could not have taken any other way: 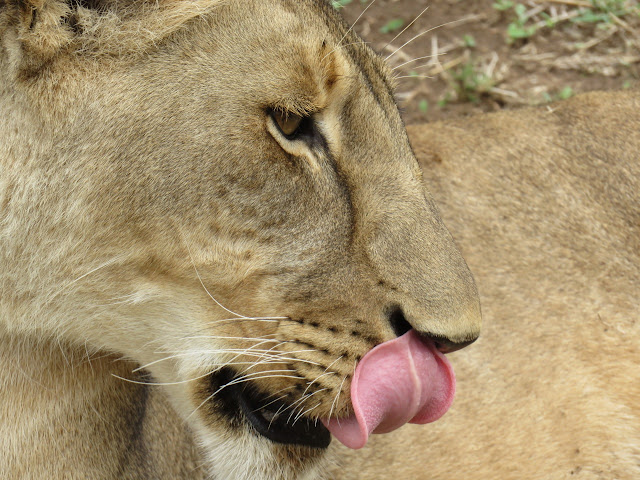 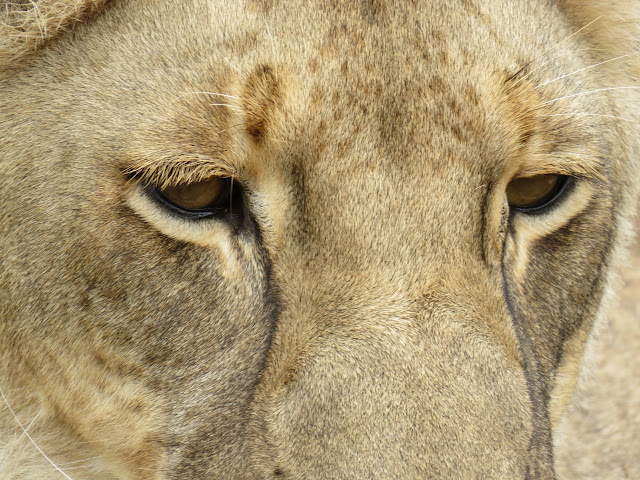 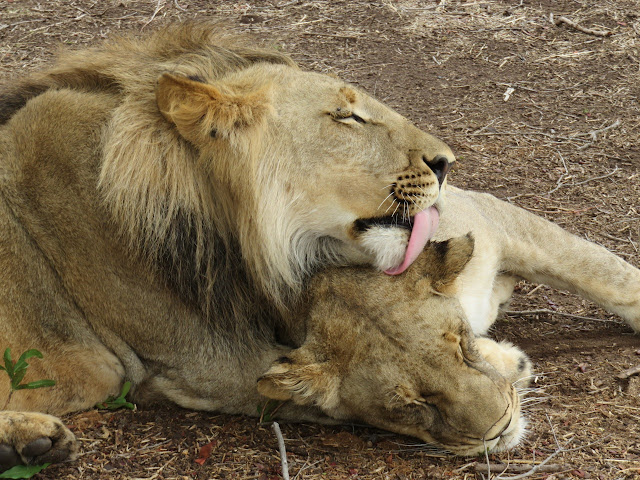 They really are magnificent creatures.

The falls themselves were spectacular, notwithstanding that it was the end of the dry season and the flow was low (by local standards). 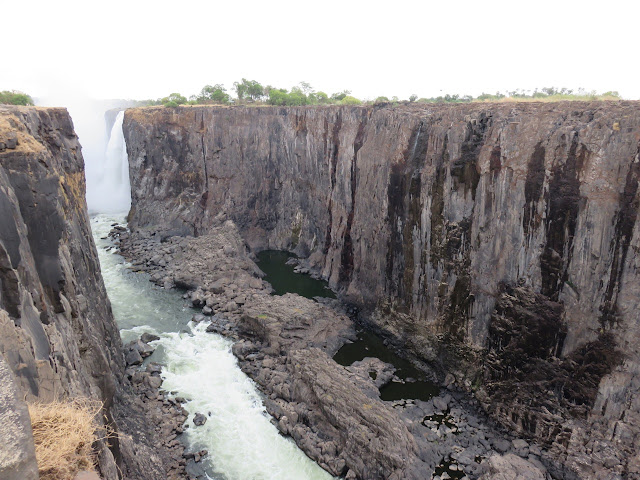 Normally the falls extend across the entire face of that cliff, and well beyond on the right hand side.  It's impossible to get the entire waterfall in one frame from the ground.  You have to get into the air, so we did: 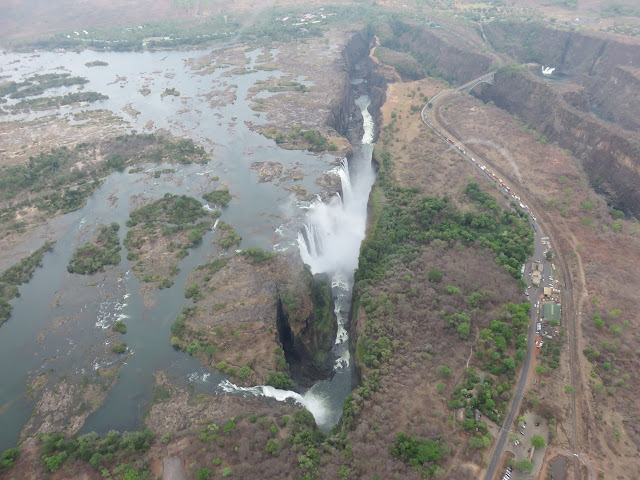 On the right hand side of that shot you can see the famous bridge built by Cecil Rhodes (of Rhodes scholar fame) that connects Zimbabwe and Zambia. 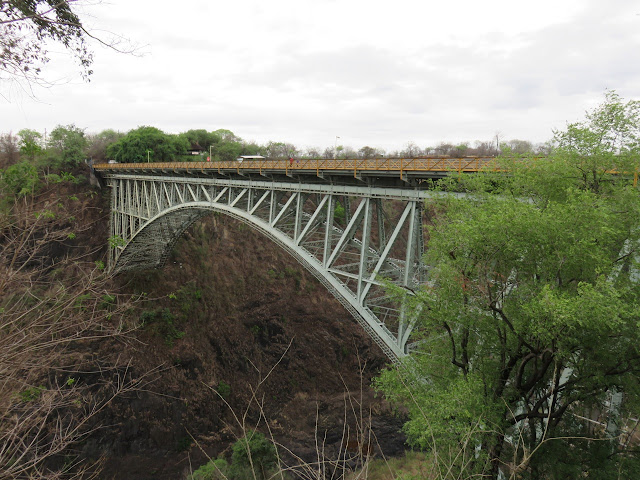 I walked across the bridge to get my passport stamped (which was the only use I got out of the multi-entry visa we'd waited in line for at the airport).  It's an interesting though not particularly pretty walk through a territorial no-man's-land surrounded on all sides by barbed wire fencing and inhabited mainly by truckers and the odd street vendor.  One of the most common trinkets on offer is old Zimbabwean banknotes.  Hyperinflation got so bad in the last decade that they printed ridiculous denominations, like 100 trillion dollars, but the largest one I was able to find was a mere 20 billion.  Today, the official currency of Zimbabwe is the U.S. dollar, which makes it very convenient for tourists.  One of the biggest problems traveling through Africa is that you want to buy things from people, but they don't want the local currency (because it's worthless), and they can't (or won't) make change in dollars.  So if you run out of small bills you can end up wedged.  That's less of a problem in Zimbabwe, though now there's talk of them adopting the Yuan as well.

Of course there were the usual not-in-kansas any more moments.  I thought this one was particularly cute: 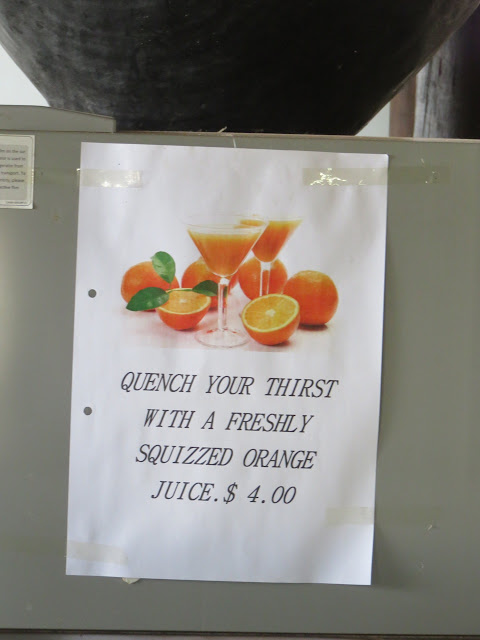 Nothing like a glass of freshly squizzed orange juice after a hard day of touring.