Supporting Donald Trump is no longer an acceptable position

I am a big believer in keeping an open mind.  But there comes a time when a social argument converges to the point where you have to say it's over, and certain positions are no longer socially acceptable.  Among these positions are the idea that it's OK to deny gay people the right to marry whom they choose, that it's OK to kill people en-masse because of their ethnicity, and that it's OK to hold people as slaves.  All this should be uncontroversial, and so the condemnation of violence committed in the name of these beliefs should be equally uncontroversial.

All reasonable people of whatever political stripe should therefore be utterly dismayed by Donald Trump's moral equivocation about this week's violence in Charlottesville, Virginia.  The president's initial statement was ambivalent, and though he did eventually issue a more unequivocal condemnation, it was pretty clear that he didn't really mean it.  Today the president removed any doubt and once again showed his true face:

"I think there's blame on both sides. And I have no doubt about it," Trump said.

The White Supremacists, of course, knew all along that Trump had their back. 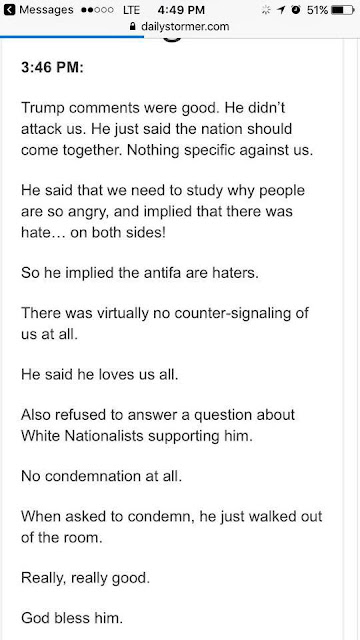 That message came from the Daily Stormer.  The site has, unfortunately, been driven underground.  I say this is unfortunate not just because I believe in free speech, but also because it makes it harder for me to show you just how ugly this movement is.  Before it went dark I visited the Stormer site, where there were headlines like these (retrieved from Google's cache):

And an entire section entitled "The Jewish Problem."  (Hm, where have I seen that before?)

Lest you try to assuage yourself with the idea that the Stormer was an outlier and not representative of the movement, here is what a North Carolina KKK leader had to say about the death of Heather Heyer today:

The leader of a North Carolina based group associated with the Ku Klux Klan says he is glad that a woman died while taking part in a protest in Charlottesville, VA over the weekend.

Heather Heyer was killed when James Allen Fields Jr. allegedly drove a car into a crowd of protesters at high speed, then fled the scene by backing up. Nineteen other people were injured.

Fields was among a group of white nationalists protesting the removal of a Confederate statue in a Charlottesville, VA, park. Heyer was among the large number of counter-protesters last Saturday.

Monday night, Justin Moore - the Grand Dragon for the Loyal White Knights of Ku Klux Klan, said he was glad Heyer died in the attack.

"I'm sorta glad that them people got hit and I'm glad that girl died," Moore said in a voicemail to WBTV's Steve Crump. "They were a bunch of Communists out there protesting against somebody's freedom of speech, so it doesn't bother me that they got hurt at all."

And then he added, for the benefit of those of you who still aren't paying attention:

These are the openly voiced sentiments that our president doesn't want to condemn.  Because they are the sincerely held beliefs of much of his base.

Supporting Donald Trump should no longer be considered a socially acceptable position in the United States of America.

By now you have probably heard about James Damore, the Google engineer who was fired for writing a memo about... well, that's where the trouble begins, because the memo was about two things.  But the media kerfuffle focuses on only one of them.

One of the two things the memo was about was the hypothesis that women might be less suited to careers in technology at least in part for biological rather than social reasons.  That is, understandably, the part that the media has focused on, and the part that led to Damore being dismissed.  But the second thing the memo was about, what was in fact its main thesis, was that, at least at Google, you cannot even advance the hypothesis that biology might be a contributing factor to women's underrepresentation in tech without putting your career at risk.  Ironically, by firing Damore, Google proved that he was actually right about that.

Before I go on, because this situation is absolutely brimming over with opportunities for misunderstandings, I want to say up front that I do not agree with Damore's hypothesis.  The evidence for it seems thin to me, and the best data indicates that there are few discernible differences in mental capacity between men and women.  I am not defending Damore's thesis.  I am defending his right to advance it without putting his livelihood at risk.  [EDIT: I used the word "right" too glibly here.  Employees generally do not have free-speech rights on the job.  But Google claims to encourage free speech and dissent.]    And I am going to go one step further and advance a controversial thesis of my own, namely, that one of the reasons that this is such a hot-button issue that that Damore's thesis is plausible.  It could be true.  Biology clearly can have an impact on cognitive ability.  Down Syndrome, for example, is a biological trait (caused by having an extra chromosome) that causes "mild to moderate intellectual disability".

I can hear the whoops and hollers already: how dare you compare being female with having Down syndrome!  Well, if you read carefully, I am not comparing those two things.  I am citing Down syndrome as evidence that biology can have an impact on cognitive ability, and hence it is not impossible a priori that having a Y-chromosome deficiency might have a similar impact.  However (and this is very important) it is just as plausible a priori that this difference could hew in favor of women as against them.  A "Y-chromosome deficiency" might cause cognitive impairment, but so could "testosterone poisoning".  (Note that I'm deliberately choosing ironic anti-euphemisms here to highlight the point that people respond to these arguments emotionally rather than intellectually.)

I can totally understand the desire to shut down this discussion.  I'm a liberal.  I want a world with equality of opportunity.  If (strong emphasis on IF) it turned out that being female did indeed have a measurable impact on one's ability to do certain tasks it would make the battle that much more difficult.  There are obvious differences in physical abilities between men and women (sports are uncontroversially segregated by gender), which has made it that much harder for women to secure the right to, say, serve in combat roles in the military, even roles which are much more intellectual than physical, like being a fighter pilot.

This point of view is directly supported by Google's CEO Sundar Pichai's response to Damore:


... we strongly support the right of Googlers to express themselves, and much of what was in that memo is fair to debate, regardless of whether a vast majority of Googlers disagree with it. However, portions of the memo violate our Code of Conduct and cross the line by advancing harmful gender stereotypes in our workplace. ... To suggest a group of our colleagues have traits that make them less biologically suited to that work is offensive and not OK.

At the same time, there are co-workers who are questioning whether they can safely express their views in the workplace (especially those with a minority viewpoint). They too feel under threat, and that is also not OK. People must feel free to express dissent. So to be clear again, many points raised in the memo—such as the portions criticizing Google’s trainings, questioning the role of ideology in the workplace, and debating whether programs for women and underserved groups are sufficiently open to all—are important topics. The author had a right to express their views on those topics—we encourage an environment in which people can do this and it remains our policy to not take action against anyone for prompting these discussions.

It is important to note that Pichai makes no attempt to actually debunk Damore's claims about women's biology.  He cites no sources.  He doesn't even bother to explicitly state that he thinks Damore is wrong!  Instead, he just says that some things, like "advancing harmful gender stereotypes", are "not OK."  Even if they are true.  And notwithstanding Pichai's nominal support of free speech, the elephant in the room is that Damore no longer works at Google.

The net effect of this is the exact opposite of what we should be striving for.  Suppressing dissent does not make it go away, it merely drives it underground, where it festers and grows and eventually re-emerges, usually (but not always) taking liberals by surprise.

Ignorance and prejudice cannot be fought with censorship.  It simply doesn't work.

I'm running out of new ways to say "Staggering hypocrisy"

Bill Maher completely destroys the last pretense Republicans may have had of hewing to any actual principles by putting Donald Trump's words in Barack Obama's mouth.


(That segment is worth watching all the way through just to see Reggie Brown's absolutely brilliant impersonation of Obama!)

To top it off (as if that weren't enough) the Washington Post reports to day that a majority of Republicans would support Donald Trump if he decided to postpone the 2020 election.  Can you imagine what their reaction would have been if Barack Obama had postponed the 2016 election?  (You actually don't have to imagine it.  Just do a Google search for "Barack Obama postpone election" to get a sampling of the conspiracy theories swirling around last year.)

At least Joe Scarborough has seen the light:

"If you believe this, hide your face in shame. Your values are objectively un-American. Read the US Constitution and repent... The party of Reagan is sick and apparently beyond repair. This poll, if accurate, is a frightening snapshot."

I could not agree more.

What an incredibly stupid thing to say

Yesterday Donald Trump threatened in no uncertain terms to use military force against North Korea:


“North Korea best not make any more threats to the United States,” Trump said at an event at his Bedminster, N.J., golf club. “They will be met with fire and fury like the world has never seen.”  The president then repeated that North Korea “will be met with the fire and fury and, frankly, power, the likes of which this world has never seen before” if it continued with this behavior.

Like just about everything the president says, he clearly has not thought this through.  North Korea's justification for its nuclear program is that it is necessary to defend itself against a militarily aggressive United States.  Our main claim to the moral high ground has been that North Korea's fears are unfounded: despite the fact that we could nuke Pyongyang back into the stone age any time we want, we won't because, well, we're the Good Guys, and the Good Guys don't do things like that.

Well, guess what.  Donald Trump just torpedoed that narrative and confirmed North Korea's fears are not paranoid delusions, they are in fact fully justified and grounded in reality: the United States is indeed willing to use military force "the likes of which this world has never seen before" against the DPRK if they don't fall into line and start taking orders from Washington.


Given the high stakes, it was unusually aggressive language from a U.S. president. Stranger still, this language has clear echoes to threats made by North Korea to the United States and its allies.  [Emphasis added.]

Trump's rhetoric and behavior is becoming indistinguishable from Kim Jong Un's.  Let us pray that both men's threats are empty.  If not, don't say I didn't warn you.