The US Fed and the Recession

[Guest post by Don Geddis.  Yet another in the series.]

Good for you!  It's clear you're not yet convinced, but your efforts to learn more about this subject are to be admired, and put you in the top tiny fraction of all people thinking about macroeconomics (including many economists!).


the Fed ... believes (or wants the world to think that it believes) that it has reached the limits of its control authority

Not really.  The Fed certainly doesn't believe that it has reached any limits.  Bernanke has stated publicly many times that the Fed is not "out of ammunition"; rather, that they are deliberately choosing to act as they are right now.


real interest rates can (and in this case should) go below zero (at least relative to inflation, which is the measure that really matters), which will discourage savings, encourage spending, and kick-start the economy

What should the Fed set the interest rate to be?  For the last few decades, the US Fed has basically (in effect, if not directly) used a formula based on the current inflation and unemployment rates, known as a Taylor Rule.  And the decades of the 80's, 90's, and 2000's -- as the Fed followed the Taylor Rule -- were ones of low inflation, low unemployment, and continual moderate growth.

Until 2008, when suddenly the Fed Funds rate no longer matched the Taylor Rule, because of the zero-bound liquidity trap: 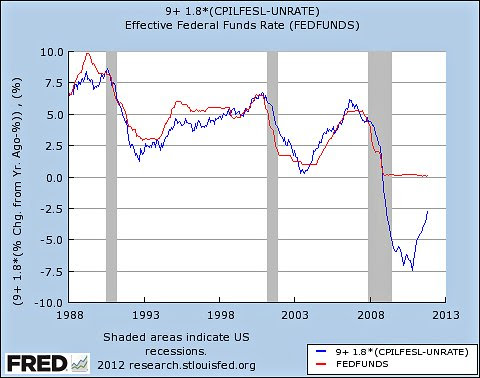 Instead, for a couple of years, the Fed Funds rate was 5-7% too high.  It was exactly as though, in the 1990's, instead of setting the rate at 3-5%, some malicious Fed official decided (under the same economic conditions) to set the rate at 8-12%.

What would you expect from any economy, with such excessively high interest rates?  An immediate crash to recession, high unemployment, etc. ... exactly the recession that we saw starting in 2008.

Interest rates, at 0%, were far too high, and that's what choked the economy.

I'm going to have to get back to you on this data.  The data you reported does not match the story I've been telling, but inflation is a complicated subject, so since you did some analysis on it, I want to be more careful in my reply than I have time for right now.

But that's exactly true!  If you're in an airplane, or hang glider, there's no problem with jumping off a cliff!


The economy jumped off the cliff when the banks loaned vast amounts of money to non-credit-worthy borrowers and left investors holding the bag. Once they did that, massive defaults and the resulting ripple effects throughout the economy were inevitable, it was just a question of when.

No, the scale of the bad mortgages wasn't enough to destroy the entire economy.  The residential housing crisis had already peaked in early 2007, and the scale of the problem was well understood by then.  But the rest of the economy properly ignored it (just like it ignored the stock market crash in 1987, and the dot-com crash in 2000).

The economy-wide problems didn't start until the fall of 2007, when the Fed raised interest rates, and Lehman Bros. was allowed to go bankrupt.  Then the whole economy began tanking.


Franky, I dont see how even 4% inflation could have changed the course of events much. That would not have been nearly enough to cause wages to rise enough for all those formerly non-credit-worthy borrowers to suddenly be able to afford to pay their mortgages.

Yes, it would have.  You're assuming that everybody who did default, were going to default in any case.  But only a small fraction of defaults were of the Ponzi scheme variety, people who bought houses they could never afford, hoping to flip them at ever-higher prices before their mortgages ballooned.  That isn't the typical case.

The typical case is someone who stretched to make their mortgage, and would have made it, but they lost their job because unemployment zoomed from 5% to 10% in a year.  Or they expected their career to advance, and to be in a higher-paying job shortly -- but that future job didn't come to pass.

Wages rising 4% annually would have had a massive effect on lowering mortgage defaults.


That begs the obvious question: why hasn't the Fed done it?

That's the best question you've asked so far, and there is no obvious answer.  It's been the subject of intense debate in the economics blogosphere for the past few years.  Here is Scott Sumner's stab at an answer.  I'll be curious to hear your theory.

Ron asked: That begs the obvious question: why hasn't the Fed done it?

An excellent, excellent question. Paul Krugman apparently has a book coming out, addressing that question. The NY Times has a fascinating excerpt.