[Guest post by Don Geddis.  Another in our recent series on macroeconomics and the recession.]

You admirably took time recently to investigate Market Monetarism, which offers an explanation for the recent Great Recession which is very different from the typical story told in the mainstream media.

You seemed to grasp the bulk of it, but your biggest complaint was about inflation:

Here's a chart of inflation over the last decade (from Wolfram Alpha):

Note the 2-4% range during the decade, and then the steep plunge to negative numbers (deflation) beginning in the second half of 2008.  Notice also that, aside from a brief attempt at the beginning of 2010, inflation was basically below trend for two solid years, only recently recovering.

But inflation itself isn't really the interesting metric.  Look at what happened to nominal GDP: 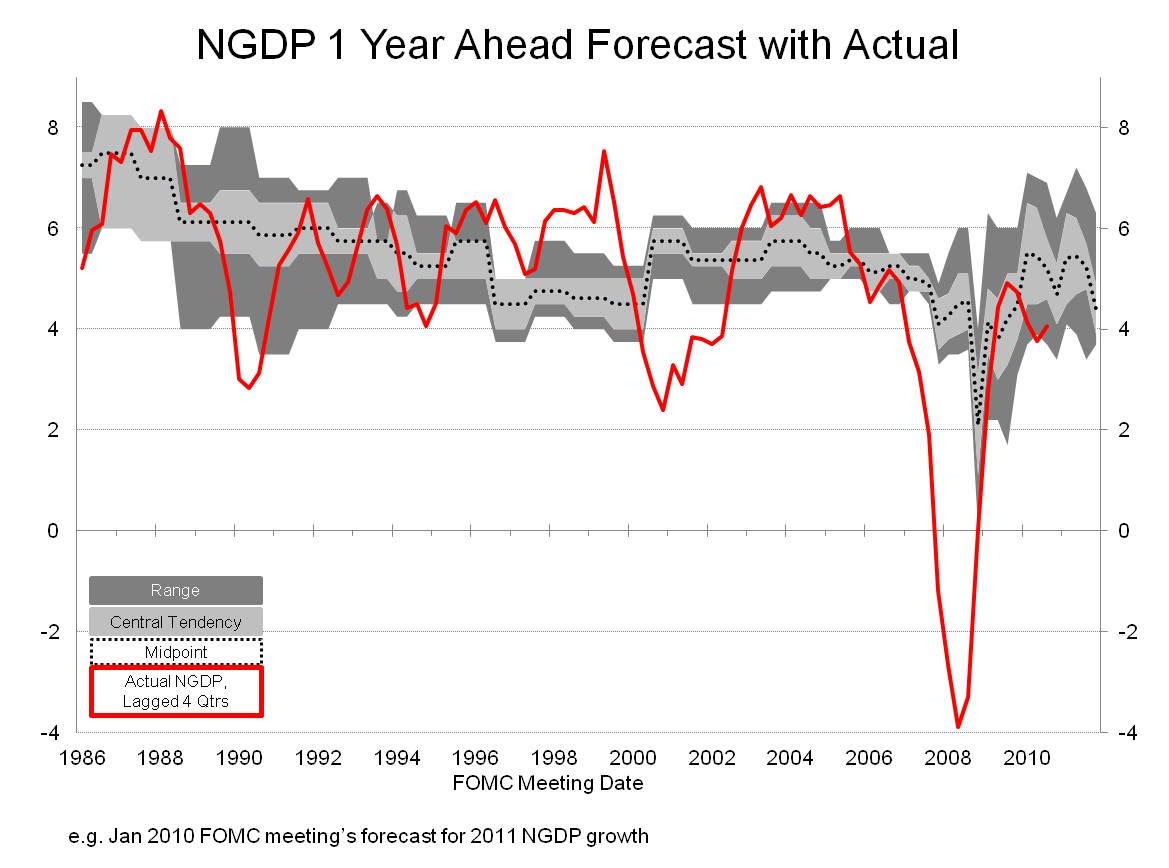 
And if you concede that the economy can get into exquisitely sensitive control regimes, where tiny changes in a crucial parameter can result in enormous differences in outcome, then how can you possibly know what would have happened if the Fed overshot by a little instead of undershot by a little?

But now we have a second question, which is the difference between level targeting, vs. growth rate targeting.  You think, if you're shooting for 2% inflation, and some years you get 1% and other years 3%, that should be ok, right?  You can't control things more accurately than that, so what's the big deal? 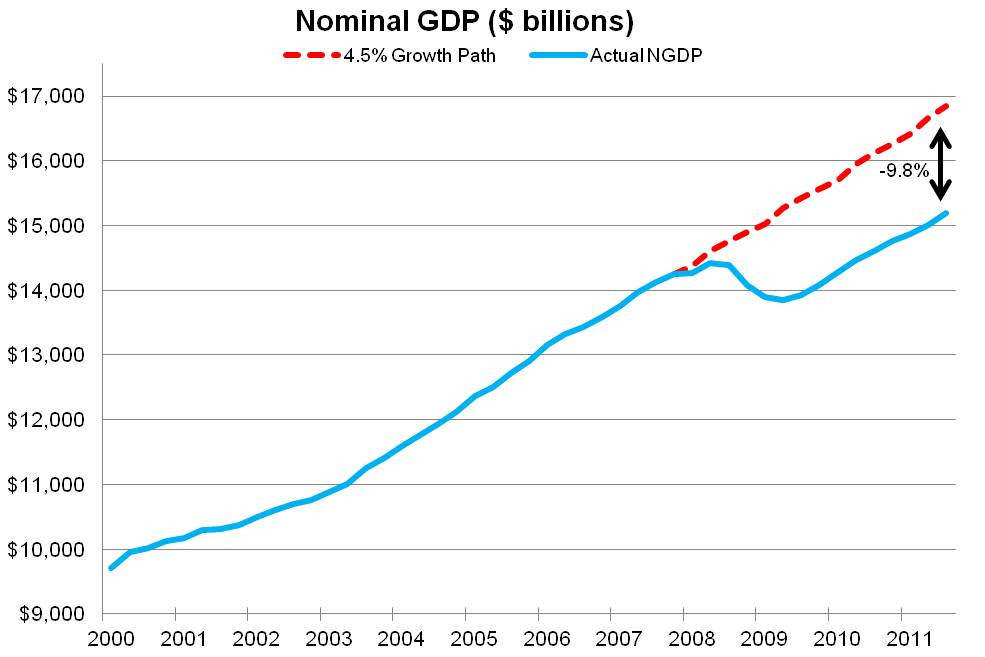 The big deal is that the US economy is, and continues to be, 10% below where it should have been, had the Fed not messed up in 2008.  It's not enough to simply "return to trend", and think that everything should be OK now.  You need to have a sense of "catchup for past failures" when you undershoot, so that you get back near the original trend line as quickly as possible.

Even given the numbers you quoted, with two years of inflation well below 2%, that should mean that this year's inflation was more like 6%, in order to "make up" for the extended too-low inflation.  Just saying "we're back to trend now!" isn't enough.

And finally, you might want to consider that "inflation" itself, isn't necessarily a well-defined concept.  People often think that inflation is a "real thing", and that we just need good enough tools to properly measure it.  But the truth is that there is no "fact of the matter" in the real world, about what the rate of inflation "is".

In any case, even if all you care about is inflation, the Fed allowing inflation to go negative in 2009, was a horrible mistake, and entirely preventable by the Fed.  They got the data early enough, and they had the tools to do something about it, but they chose not to.  And we're all suffering the Great Recession consequences for that now.
Posted by Don Geddis at 1/31/2012 04:11:00 PM

I've been doing a lot of thinking about MM in terms of control theory and arrived at the following insight: if you treat NGDP as the controlled variable then you get this really nice property that you don't have to guess what the inflation rate should be to achieve a particular level of real growth. If real growth slows down, nominal inflation automatically increases, and vice versa. My guess is that if you actually did the math the result would be some nice stability properties (and possibly a Nobel prize in economics :-)

Ron: I'm really impressed that you've spent so much effort looking into this new idea. Most people either don't care about macroeconomics, or else feel that they already know enough so they don't need to put in the time to learn any more. Learning a new, powerful idea is a rare pleasure in life!

You're not the only one who senses a hint of Nobel around this idea.

I don't want to get ahead of the history, but it reminds me a bit of Einstein with Relativity. An obscure researcher, working on a minor problem in the field, comes up with a solution that revolutionizes the field. People can be forgiven for being skeptical: when some minor researcher proposes restructuring the whole field, the proper priors are that the guy is probably a crank.

Scott Sumner is not Einstein. He actually didn't even invent the idea of NGDP level targeting. But he's been the most public cheerleader of the Market Monetarism movement over the last few years, and has clearly become the face of this idea.

But the fact that it was a no-name guy, from a backwater college, who is pushing it, makes everyone suspicious at first. And that it is counter to mainstream consensus opinion in the field. If the idea were correct, why wouldn't Paul Krugman on the left, or Greg Mankiw on the right, be one of the guys pushing it? How could those smart, senior, respected people be wrong, and this unknown loser be right?

We may be seeing a Kuhnian paradigm shift in macroeconomics, right before our eyes. If NGDP targeting becomes mainstream economic consensus in the next couple of years, a Nobel is not out of the question.

As Haldane said: I suppose the process of acceptance will pass through the usual four stages: (i) this is worthless nonsense; (ii) this is an interesting, but perverse, point of view; (iii) this is true, but quite unimportant; (iv) I always said so.