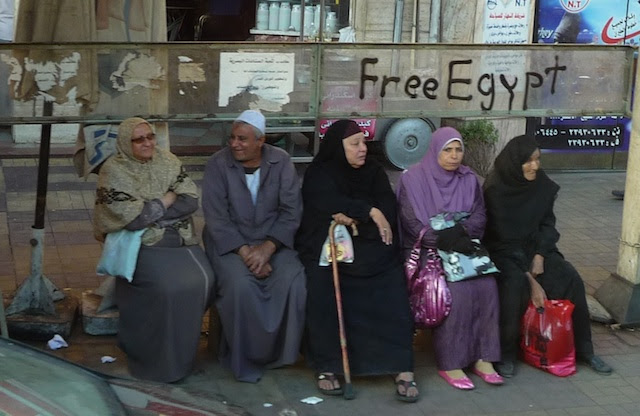 If you've ever wanted to visit Egypt but don't like to deal with throngs of tourists, now is your moment. The political uncertainty here scared most of the tourists away back in February, and they still have not returned. We've spent the last three days on a whirlwind tour of Luxor and Cairo with a few hundred of our closest friends, and as far as I could tell our group constituted 90% of the tourists in all of Egypt. We saw all of the major sights -- Luxor, Karnak, Valley of the Kings, the Pyramids, the Egyptian museum -- and didn't have to wait in a single line.

Other than the almost eerie emptiness at tourist destinations, the situation on the ground seems mostly normal despite the fact that the country has been under military rule for eight months. There are no soldiers on the streets, no tanks, no military checkpoints. (There are, however, occasional roadblocks set up by the locals, which narrow the road down to one lane and force cars traveling in opposite directions to alternate, which is annoying but not intimidating.)

Traffic in Cairo is completely insane, which I am given to understand is par for the course. It's a city of 20 million people without, as far as I can tell, a single functioning traffic light. It is the craziest, most chaotic traffic I have ever seen in my life. Cars, busses, scooters, and pedestrians intermingle freely with no apparent pattern. If there are rules of the road here beyond "biggest vehicle with the most aggressive driver wins" I have not been able to discern what they are. And yet it kinda sorta works. At one point it took our bus half an hour to go 300 yards around Tahrir Square to get to the Egyptian museum, but we did get there eventually, and without a single casualty. (The photo at the top of this post was taken out the bus window on that trip.)

Sadly, underlying the relatively quiet and orderly (by the standards of revolutions) political changes is an economic desperation of a sort I have never before experienced, and I've been to some pretty poor places. The flip side of all the excess capacity in the tourist sector is an army of street vendors, taxi drivers, boatmen, hoteliers and restaurateurs who have been abruptly cut off from their livelihoods. In a culture that even in the best of times does not shy away from, let us say, high-pressure sales tactics and haggling, the result is an army of underemployed service providers competing fiercely for the few customers that are left. So while you don't have to deal with lines, you do have to deal with a constant barrage of hello's and excuse-me's and please-look-at-my-shop's.

But it doesn't end there. The instant you display even the tiniest bit of interest, they will latch on to you and not let go until they have extracted as much money from you as they possibly can. Americans by nature don't like to be rude. The Egyptians have figured this out, and have developed a vast array of finely honed techniques to make it impossible to extricate yourself from them in any other way. I've travelled to a lot of places and seen a lot of high-pressure sales tactics, but the Egyptians have truly become the masters of the game.

But the most amazing thing about Egypt is not the history or the quiet revolution or the chaos on the roads or the street hustlers. It is something I suspect many visitors don't notice, and which Egyptians don't draw attention to: this is probably one of the poorest countries we've been to, one in the midst of political and economic turmoil of the highest order, and yet we have not seen a single beggar. Not one.

If by some bizarre chance anyone from Egypt is reading this, I have a message for you on behalf of my fellow tourists: we get it. You are facing some really tough challenges, and we understand that whether your children eat tonight depends on whether you manage to sell us a trinket for a dollar. We respect that your response to these challenges is entrepreneurial. We respect that you are trying to free yourselves from a dictatorship and establish democracy against some pretty tough odds. And we want to help. We really do.

At the same time, you have to understand that while we want to help, that is, at least for most of us, not our primary purpose for coming to your country. We're here to see the sights, to learn, and to have fun. Being overrun by street vendors at every turn is not fun. Being hustled is no fun. And having to say no is also no fun. In fact, it's painful, because we really want to help. But we can't be your saviors. At the end of the day, you're going to have to put your country back together yourselves. And after seeing what your ancestors accomplished 4000 years ago there is no doubt in my mind that you can do it.

If you are Egyptian and you are a street vendor or you know a street vendor I have a suggestion: set up your table and put up a sign that reads: "Hello, my name is Ibrahim. I am selling this merchandise so that I don't have to beg to feed my family. Please take a look, and if you like something, buy it. I promise to charge you a fair price, and not to hassle you if you decide to pass." Then follow through on that promise. I predict that you will do a better business than your competitors with that approach. Surely it's worth a try? Who knows, you might even start a revolution.

Bro
Loved this thoughtful post- unfortunately what is happening is occurring in many other countries - including ours! As a psychologist I see human behavior as often being driven by our need to survive - and when resources are scarce, people get SCARED- and when we act out of fear we get irrational- mean- violent, "pushy" - and so your suggestion for being honest and not so "in your face" was lovely but unrealistic. Seems to me the violence in this country is on the rise because of the same factors the Egyptians feel - not enough to go around anymore - it's so sad.
welcome home

Technically, the Ancient Egyptians are not the ancestors of the people living there now, due to the usual sorts of population migrations and wars and all that other "history" stuff. (Although the point remains valid of course: hard work and skill built wonders, and still can.)