Travelogue: The Roma in Rhodes

Met this kid on the island of Rhodes: 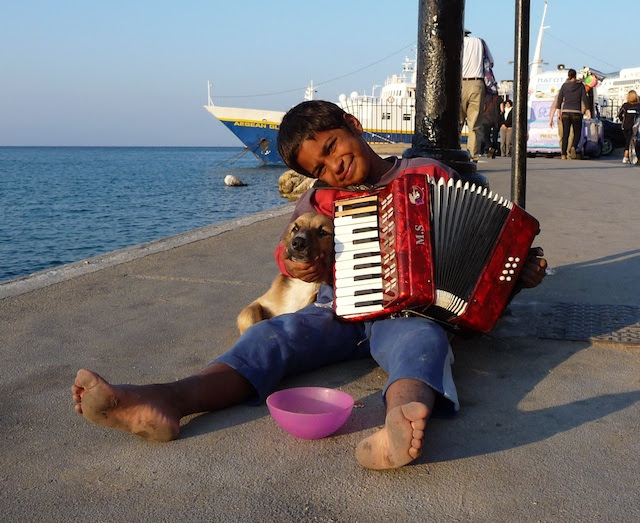 He is a Roma, commonly known as gypsies. He posed for me for a euro.

The picture I didn't get (and I'm still kicking myself) was of his younger sister, who I'm guessing was about three. We found her in a similar circumstance: on the street, cradling a tiny accordion in her lap, playing with the coins in the bowl in front of her as if they were toys (which to her they probably were). It was such a heartbreaking sight that it didn't even occur to me to take her picture until we'd gone well past her. When I finally came to my senses and returned to the spot, her older brother had taken over on accordion detail.
Posted by Ron at 11/03/2011 01:52:00 PM

Wow- makes me realize how good many of us have it - so does this kid live on the street? Any idea where the parents were? And no shoes.... wonder if he owns any- although he does not look malnourished....

> so does this kid live on the street?

I have no idea. But my guess is that the family had an encampment somewhere. Roma are known for a nomadic lifestyle, but they're not really "homeless" in the sense that they once had a house or an apartment and now they don't. This is just how they live.

> Any idea where the parents were?

Yes, the whole family (including the younger sister) was hanging out on a small beach about 100 yards away. Not to leave you with the wrong impression, this beach was in the harbor, so it's not exactly like they were hanging out in a tropical resort. But they did look like a more or less regular family hanging out at the beach, except that they didn't have any stuff with them (no umbrellas or beach chairs) and they were all fully clothed. The 3-year-old I'd seen on accordion duty earlier was playing in the sand and looked more or less happy.

I should also mention that it was pretty cold. It was November after all.

> And no shoes.... wonder if he owns any- although he does not look malnourished....

You have to understand that for many Roma, begging is more or less the family business. They've been doing it for generations and they're pretty good at it. So no, they aren't starving. There are many people in the world doing worse than the Roma.

I feel sorry for these kids not because they're starving (they're not) but because they have to do this shit work from an early age and for their entire lives in order to survive. But they do survive.

Thanks for that info on the Roma- now I "get" it! Again - makes me appreciate how good I have it! Although I'm glad the kid was smiling, at least gets food and seemed happy - he's so young and probably thinks that this is a "normal" way of life for many.....