Travelogue: The Grand Canyon of Jerusalem

A picture may be worth a thousand words, but there are some pictures that can't be fully appreciated without a few words of explanation. This is one of them: 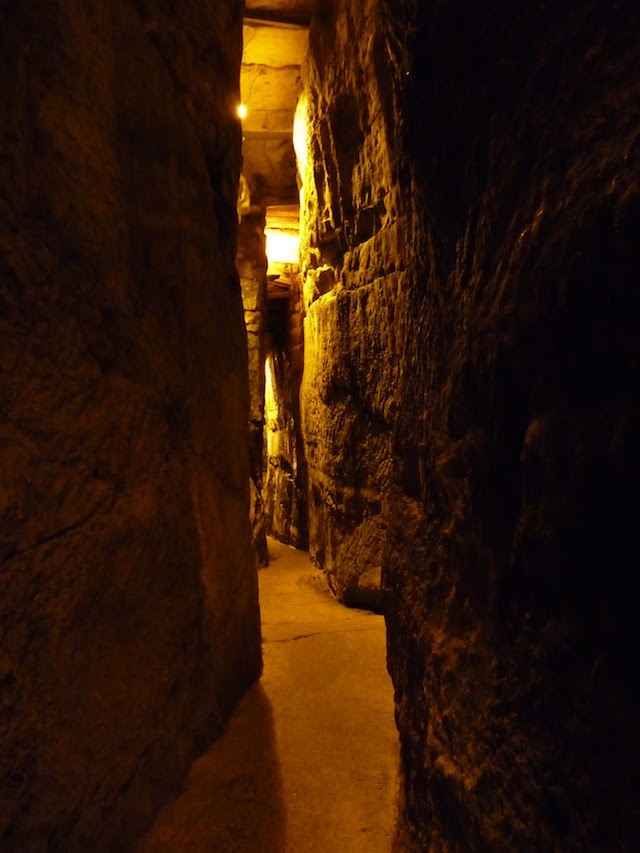 What you are looking at is an aqueduct carved into granite bedrock by Herod the Great around 20 BC. But that is not the impressive part. The Mediterranean is lousy with aqueducts. To understand the significance of this one we have to start with the Temple Mount.

The Temple Mount is an enormous plaza, about 37 acres in all. Normally when you build a plaza you find a more-or-less flat space and pave it. But Jerusalem is built on rolling hills. It has no flat spaces to speak of, so Herod made one by leveling the top of one of the hills. This in itself was no mean feat because the hills are made of granite. But the mount extends well beyond the boundaries of the flattened hill top. To create the extra area, Herod built enormous stone walls and filled in the voids between the inner part of the walls and the hill. (The Mount is so vast, in fact, that it actually covers two hills, not one. The second one is Mount Moriah where tradition has it that Abraham offered his son Isaac as a sacrifice to God, and Mohammed ascended into heaven to receive the Holy Q'uran. The tippy top of Mount Moriah just barely juts out of the top of the Temple Mount where it is covered by the Dome of the Rock. Alas the Dome is nowadays closed to non-Muslims, but if you convert to Islam you can go inside and see it.)

The Temple Mount would be an audacious feat of engineering even by modern standards. In its day it was bordering on the miraculous. Alas, its glory was short-lived. In 70 AD the Romans squished a Jewish rebellion and in retaliation destroyed the Temple. They tried to destroy the Temple Mount as well, but it proved to be quite literally rock-solid. Since then, 2000 years of weathering, earthquakes, and neglect (in the Byzantine era the Mount was used as the city dump) have left it largely intact.

But not untouched. In the intervening 2000 years the city of Jerusalem literally grew up around it. New buildings were built on top of the ruins of old ones, and the street level rose to the point where today it is nearly level with the top of the Mount. The southern and eastern walls are still visible today, but the western wall is almost entirely buried underneath 2000 years of construction and brick-a-brack. (There is no northern wall because that part of the Mount sits on the bedrock left behind after the hill was leveled.)

After Israel gained control of the Temple Mount in 1967 it opened the area to archaeological research. One of the excavations is called the Kotel Tunnel ("kotel" is the Hebrew word for "wall") and it is pretty much what the name says: a tunnel that runs the entire length of the western wall, a few dozen to a few hundred feet below the current street level.

As you walk north along the tunnel, the bedrock beneath gradually rises up to meet you. Herod, being somewhat anal-retentive about architecture and not content to leave well enough alone, had the bedrock chiseled away so that it looked like a continuation of the wall. This boundary between the actual wall and the faux wall carved into the bedrock is one of the many archaeological wonders that have been unearthed in this excavation.

So you're walking along north along this tunnel. The Wall is to your right. At some point it transitions almost imperceptibly from stone wall to carved bedrock. And then you get to the base of the northern end of the Temple Mount, what started out as the interior of a granite hilltop, a sight that until a few years ago, human eyes had not beheld for some 2000 years, give or take. You are standing on what 2000 years ago was street level (and indeed, you are standing on the original paving stones), but is now a few hundred feet underground.

And in front of you is the aqueduct, carved by human hands out of solid granite over 2000 years ago, now completely covered by the city several hundred feet above your head. It's a serious Indiana-Jones moment.

To say that my mind was blown would be quite the understatement. If you are ever in Jerusalem, the Kotel Tunnel is a sight not to be missed (unless you suffer from claustrophobia). Tours are by appointment only. There isn't much room in there, and some parts of the tunnel are so narrow that traffic can only flow one way at a time so they have to limit the number of people. But it's mostly surprisingly roomy in there. In many places, you are walking through the interiors of old buildings that were later converted to basement water cisterns as the city grew above them. So if you don't mind the odd tight squeeze and low ceiling I cannot recommend it too highly.
Posted by Ron at 11/07/2011 08:53:00 AM

"Carved into granite bedrock by Herod the Great around 20 BC"?

Really? Sorry to be nitpicking, but I have to quote Brecht:

"Who built Thebes of the 7 gates?
In the books you will read the names of kings.
Did the kings haul up the lumps of rock?

And Babylon, many times demolished,
Who raised it up so many times?"

You're right of course. I should have said: carved into the rock by Herod's slaves.