It's about a quarter to ten and we're still here. Looks like we dodged the bullet. But that was as close as I ever want to get.

Got about four or five hours of sleep. Not bad all in all, but I still feel like somethin' the cat dragged in. The air in our neighborhood is stagnant and thick with smoke. There is a thin layer of ash covering everything outside, and though our house is pretty well sealed, the smoke has started to seep in through the chimneys. (They are gas fireplaces, so they don't have regular flues that you can close.) We had to abandon the mater bedroom last night and sleep in the guest room because of the smoke (note to self: never build a house with a fireplace in a bedroom), but I'll take a smoky house over a burned-down one any day.

An acquaintance of ours lost his house to a brush fire a few years back. He was a volunteer fireman, so he knew all the right things to do, and he did them all, and he still lost his house. It turns, unsurprisingly, that it's all about the wind. If the wind is blowing a brush fire in your direction you are absolutely fucked. So I am profoundly grateful for the stagnant air. This could have been much, much worse.

[Update at 10:15] Seems I may have spoken too soon. I just turned on the TV. The fire is apparently still heading closer to town. 800+ homes have been evacuated, presumably in the neighborhoods just east of us. So it's not over yet.

Ironically, the best coverage of the fire is on the local Fox News station, and it's none too good. It's amazing how much TV news reporters can talk and how much footage they can show without conveying any actual information. But every now and then they pull out into a wide shot from a helicopter that shows us exactly where the fire is, which is, of course, the main thing people want to know. Someone needs to figure out a way to track a fire in real time.

[Update at 11:00] The latest info from the LA Times seems to indicate that the fire is moving north, which is to say, away from us. The official word as of 6AM was "no structures immediately threatened."

[Update at 12:00] The smoke has dissipated a bit, so I went outside and shot a couple of photos: 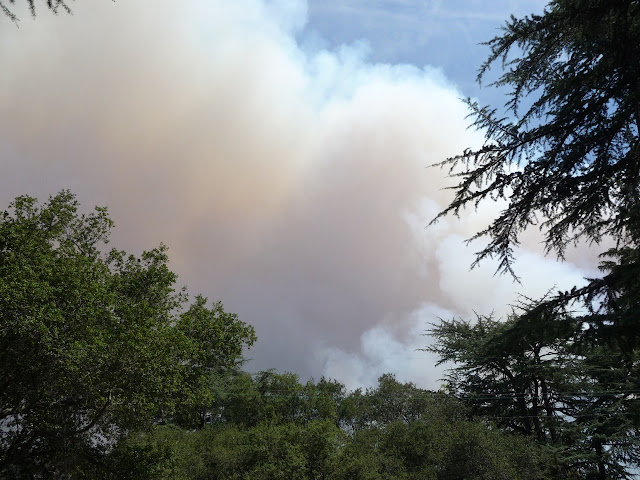 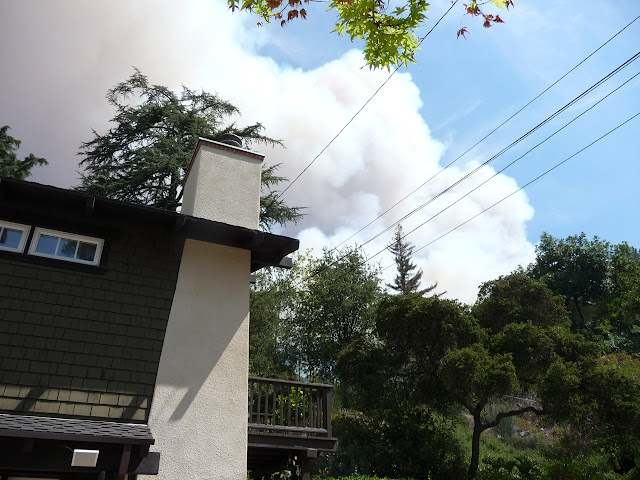 Believe it or not, that's looking a whole lot better than it has for the last eighteen hours or so.

[Update 3:20PM] It has been a tense afternoon as the fire moved east to west across the ridge behind our house, but it now definitely looks like it will pass us by. Weather conditions seem to be improving a bit as well. I'm starting to relax a little.

Thanks to everyone who called and emailed to express their concern and offer help. It was very much appreciated.
Posted by Ron at 8/28/2009 09:32:00 AM