According to both the World Bank and the IMF, Togo is the 11th poorest country on Earth by GDP per capita.  That makes it the poorest country we have ever visited.  (We did once set foot in Mozambique, the seventh poorest country in the world: in 2008 we were on a safari in the Kruger national park in South Africa, driving along the fence that marks the border between South Africa and Mozambique.  Elephants had torn a big hole in the fence, so on a lark we walked through the hole.  But there was no one there to stamp our passports so I'm not sure that counts.)

Voodoo is a significant presence in Togoan culture.  51% of the population holds "indigenous beliefs."  This was reflected in the costumes worn by the welcoming committee: 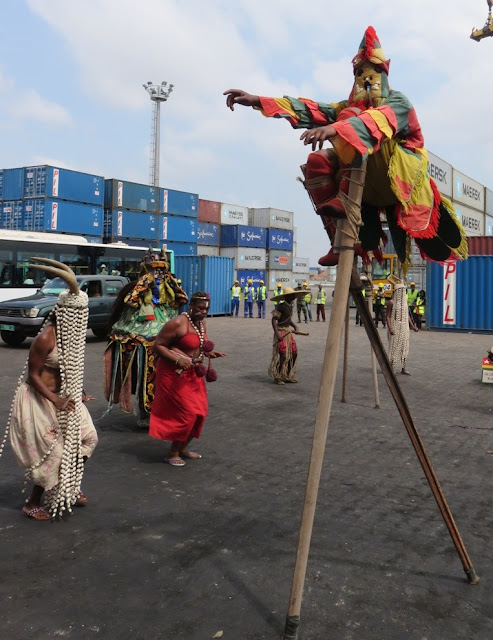 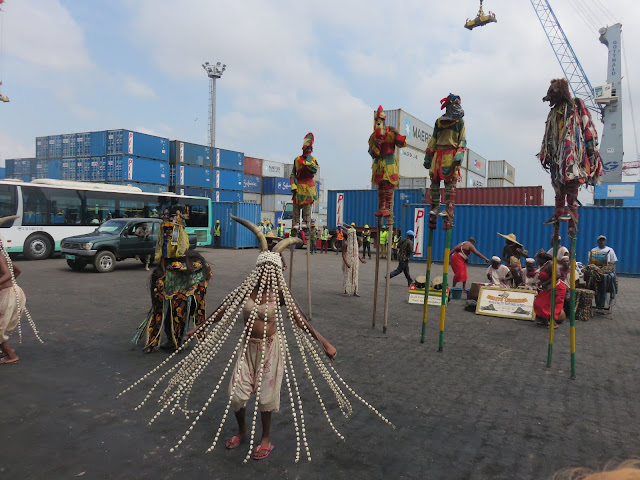 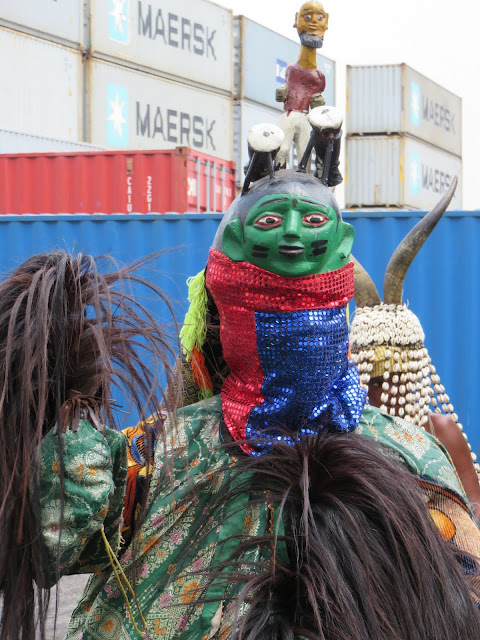 Had a few more we're-not-in-kansas-any-more moments.  Here's a fellow walking down the middle of a major highway carrying a poster featuring anatomical drawings. 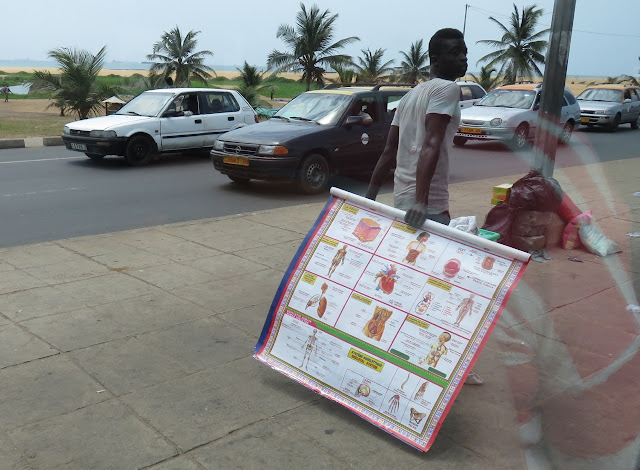 I never did find out what he was doing.

Here they are selling coffins by the side of the road: 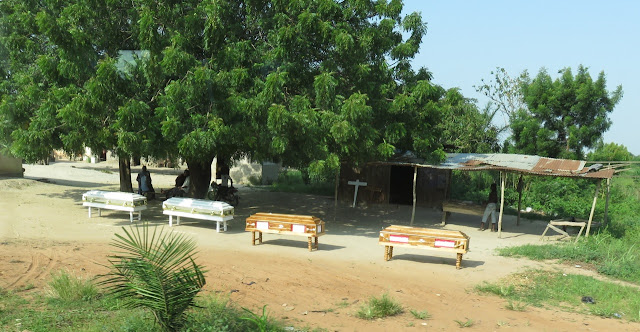 I did not realize just how desperately poor Togo was while I was there (I'm ashamed to admit that I did not do my homework at the time).  I was just struck by how much more pushy the street merchants were than other places we've been (and that's saying something!)  I was just about ready to give up on the place and retreat back to the ship when something inside me said, no, you're giving up too soon.  So I went back out and immersed myself in the fray, and ended up meeting a gentleman who called himself Benjamin but whose real name is Kenake Kodjo.  I ended up buying a pair of figures carved out of bone from him, and he later emailed me this description of their significance: 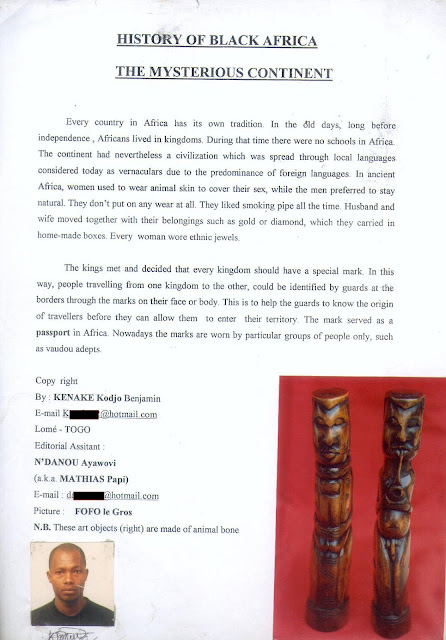 (Click on the picture to enlarge it so you can read the text.)

But the most interesting part of the visit was seeing an actual voodoo ceremony.  There was some disagreement about just how touristified it was.  On the one hand, they waited until four busloads of tourists were all seated before starting.  On the other hand, they didn't really play to the audience, and some of what we were seeing looked pretty real.  Not real voodoo magic, of course, but real in the sense that this is what they really do, and it's not just a show that they put on for the tourists.

There was drumming and dancing, and after a while the men started to go into trances. 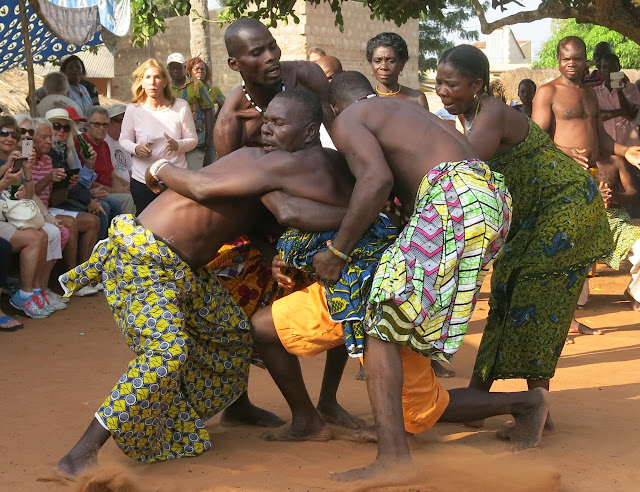 They seemed to really lose control over their bodies.  They had to be restrained, and a few of them were carried off "stage" by their compatriots.  The first time it happened I thought a fight had broken out. 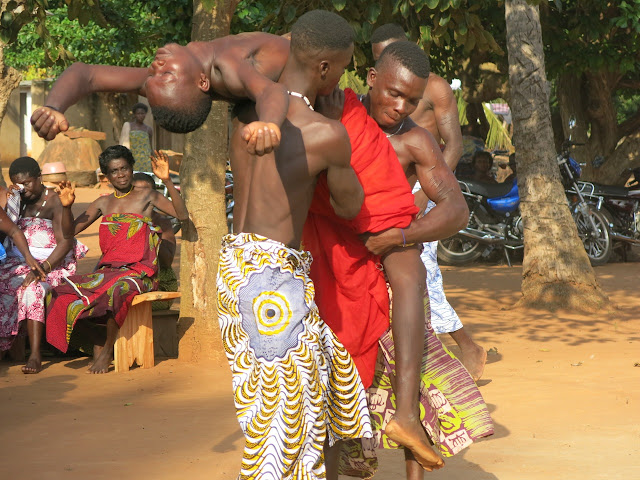 After a while, they dug a hole in the ground in which they buried a bag of broken glass: 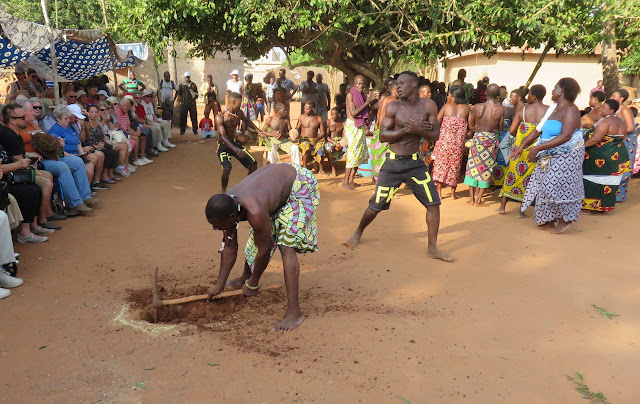 Some of the men used pieces of the broken glass to cut themselves.  Real blood was shed, which was one of the things that convinced me that we were seeing the real deal and not just a theatrical performance. 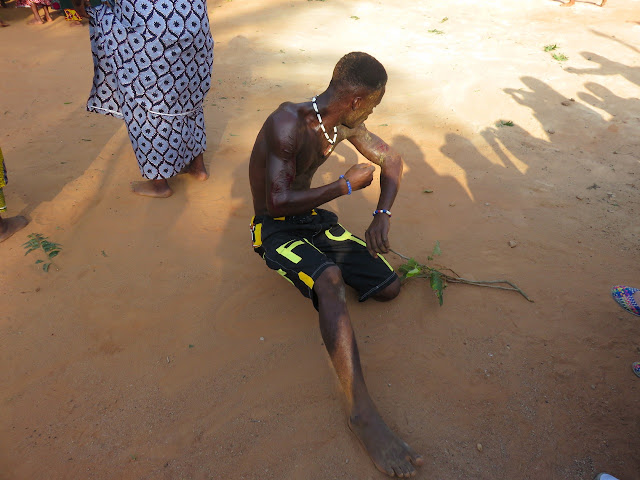 This particular tribe does this even when they aren't in voodoo trances.  They consider the resulting scars attractive. 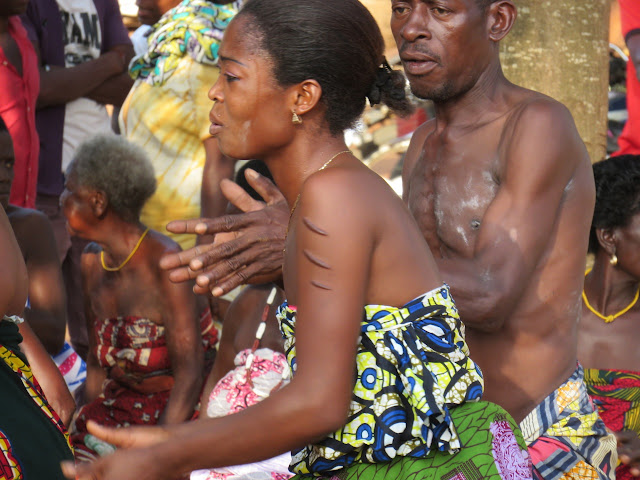 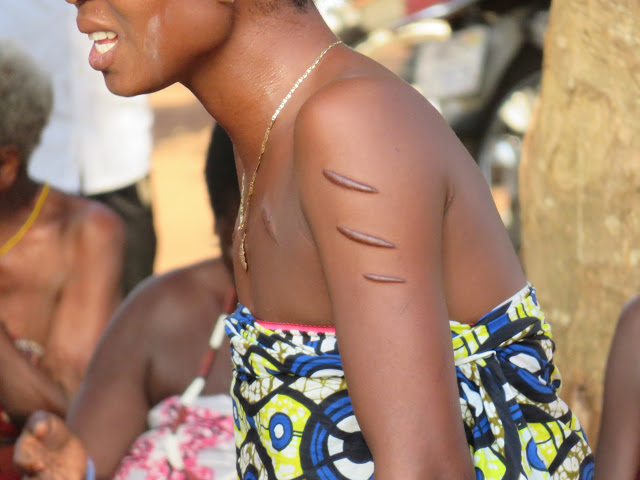 After a while they dug the bag of broken glass up and presented it to the chief.  The glass had been magically transformed into coins. 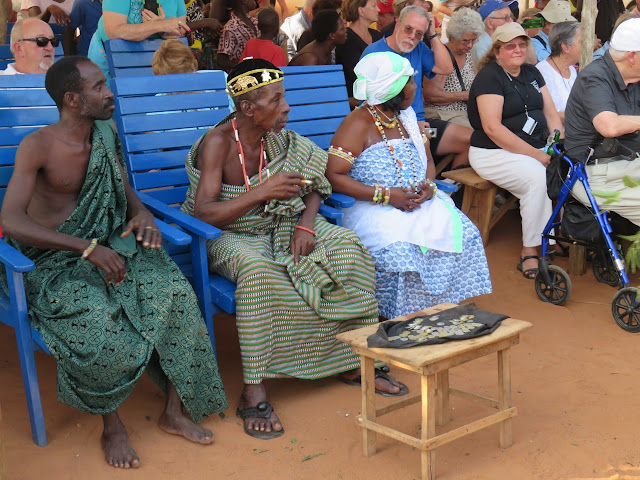 That's the chief in the middle with his wife and son on either side of him.  He looked extraordinarily bored throughout.

BTW, I didn't actually realize that what we'd seen was supposed to be a magical transformation until after it was over.  There was no explanation given (another indication that it wasn't a performance).  It just happened.  They didn't do anything to draw our attention to it or to set it up as a proper magic trick.  And people were going into trances and turning into whirling dervishes the whole time they were doing the coin trick.  It was only after the fact that our guide explained what was going on.

Apparently, magic tricks of this sort figure prominently in Togoan voodoo ceremonies.  There was another group that saw a different ceremony where there were these little hut-like things that moved around, apparently under their own power.  Of course, there was a person inside "driving", but occasionally they would lift up the little "hut" to reveal a small animal (and no human) inside, so it was clearly intended to look like magic.  I don't have many regrets in life, but not having a chance to see that with my own eyes is probably going to be one of them.  (I found this video of what seems to be what the other group saw.  And here's a better one.  It's actually a pretty good trick.)

The interesting question to me, and which I never got a chance to find out (they ushered us away while the ceremony was still going on -- we were told it would go on for hours) is whether these things were intended to look like real magic, or if it really is just supposed to be theatre all of the participants know that they are tricks.  If it's the former, that raises an interesting question: who among the participants is in on the trick?  And how do they decide who to initiate into the circle of trust?