Could Trump be broke?

One of the big mysteries of Donald Trump's run for the White House is: why would he do it?  It seems like an awful lot of bother even for a self-aggrandizing narcissist like Trump.  And being the President is actually kind of a sucky job.  Yeah, you get a nice airplane out of it, but Trump already has a nice airplane (actually, several nice airplanes and a helicopter).  The White House would probably be a step down for him in terms of day-to-day lifestyle.  And the pay is pretty lousy by CEO standards.

So what's the draw?

There is actually only one theory that makes sense to me, that is consistent with all of the available data, and in particular the fact that he's the first presidential candidate since the 70's not to release his income tax returns: Trump is actually broke.

Bear with me here: when you're in the 0.01% being broke doesn't mean what it means to you 99-percenters.  When ordinary shmoe's go broke it means they run out of money and can't pay for things.  When people like Trump go broke, it means he's borrowed more money than he can pay back, and this is very possible.  Trump might have gotten himself in over his head in a business deal and accumulated debt that is close to or even greater than his assets.  It even possible that he has done this without his creditors even being aware of it.  Not likely.  But possible.  And it would explain why he's running for president: it would give him leverage to get his ass out of whatever sling he's gotten it into.

There is a lot of evidence that Trump is not as rich as he claims to be.  Independent estimates of Trump's wealth range from under 3 to around 5 billion, well under his claimed $10B net worth, though still nothing to sneeze at.  But I wonder if those estimates might be wildly off, and Trump's run is really a hail-Mary to save himself from public humiliation. 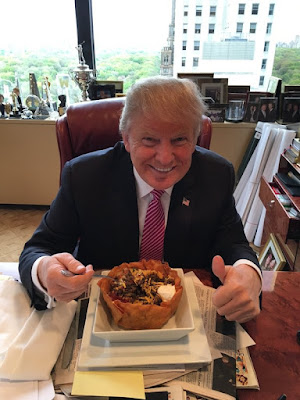 Well, I sure didn't see that coming

When I wrote about Donald Trump's prospects to win the Republican nomination it was just before the New York primary, and he had just lost three states in a row.  I did the math and concluded that he had a shot at winning the nomination outright, but that it would come down to the wire on June 7.

Since then there has been a very interesting new development: The Donald won New York, and every primary since then.  Not just won, but totally destroyed Cruz and Kasich, winning 285 of the 300 available delegates across seven states.  If he were anyone else, it would be over.  A slam dunk.

Because he's not anyone else, it's not quite over.  Ted Cruz seems not to have made his peace with the fact that Donald Trump will, almost certainly, be the nominee.  Today he called Trump a "pathological liar," "utterly amoral," "a narcissist at a level I don't think this country's ever seen" and "a serial philanderer."  What he hopes to accomplish with these attacks at this point is a tad unclear.

I am flabbergasted.  Before New York, Trump was ahead, but his path to the magic 1237 number was tenuous, and I was confident that, at the very least, California would matter.  I was even looking forward to a contested convention just because it's a lot more fun to watch a drama when you don't already know the ending.  But (spoiler alert) Donald Trump is (almost certainly) going to be the Republican nominee.  If we were denied the nomination now, it would be the end of the Republican party.  (It might be the end of the party anyway.  A boy can dream.)

I would be more sanguine about Trump's chances (or lack thereof) in the general election if I hadn't been so utterly and completely wrong about his prospects in the primaries.  When he first announced, I, like so many others, wrote him off as a joke.  But Trump is no joke.  If I were a Muslim living in America, I'd be very, very worried.