It's a doggone mystery

A study has confirmed what dog owners around the world already know: dogs can recognize other dogs:


Dogs pick out faces of other dogs, irrespective of breeds, among human and other domestic and wild animal faces and can group them into a category of their own. They do that using visual cues alone, according to new research by Dr. Dominique Autier-Dérian from the LEEC and National Veterinary School in Lyon in France and colleagues. Their work, the first to test dogs' ability to discriminate between species and form a "dog" category in spite of the huge variability within the dog species, is published online in Springer's journal Animal Cognition.

If you think about it, a modern dog's ability to visually recognize other dogs is a deep mystery.  Most extant dog breeds have only existed for a few hundred years, and many bear very little resemblance to anything in a dog's ancestral environment.  That's not nearly enough time for an innate ability to recognize dogs to have evolved.  So there are only two possibilities:

1. The ability to recognize other breeds was somehow wired into the brains of dogs before those breeds actually existed, or

2.  Dogs somehow learn how to recognize other dogs, including breeds that they may never before have encountered

It would be interesting to design a study to try to suss this out.  Either way, it's pretty cool that dogs (and people too, for that matter) can recognize these: 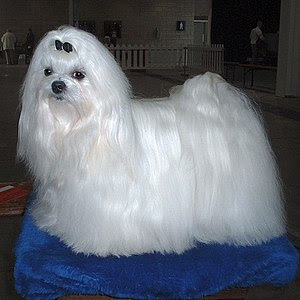 When the training set in the ancestral environment looked like this:

I can recognize any dog as a dog. Really, it's not too surprising that my dog can do the same.

There are a lot of things that you can recognize that your dog can't. The words you are reading right now, for example.

It will be interesting to see if they put wolves in the dog category or the non-dog category.