After a day of communing with penguins and Santa Claus, we raised anchor and headed over to the old whaling station at Grytviken.  Today this is the only human habitation on South Georgia, and it's just a few dozen people who man the museum, research station, and government offices which maintain the British claim to the place. 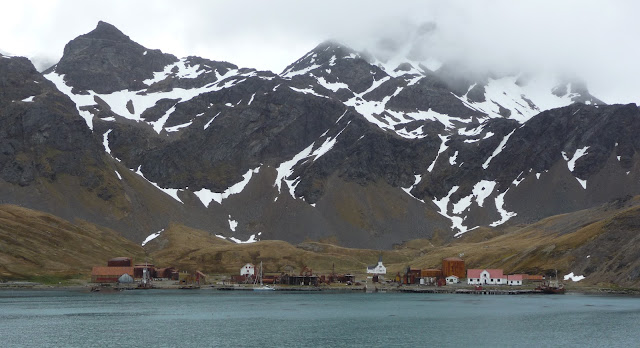 A hundred years ago Grytviken was an active whaling station.  Today its main claim to fame is that this is where Ernest Shackleton found rescue for his stranded crew after a failed attempt to reach the south pole.  If you aren't familiar with Shackleton's story you really should go read it.  It is one of the most amazing tales of courage and heroism (and, frankly, stupidity) in human history.

There is, needless to say, not a whole lot to do in Grytviken nowadays.  We visited Shackleton's grave and drank the traditional Irish whiskey toast, then climbed up the hill for the panoramic view:

The sun was setting, and a deck of clouds was starting to roll in, and since it was Christmas eve of course we all had to go to church: 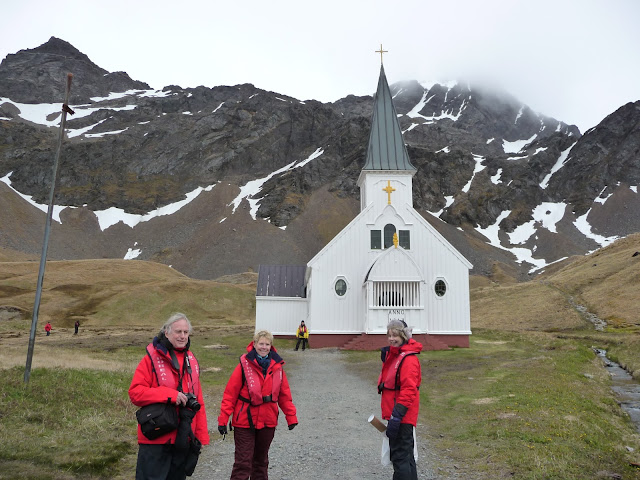 That's Nancy in the middle, flanked by Richard Dawkins and his wife Lalla Ward, and yes, we are all on our way to that church in the background for Christmas eve services delivered by one of our fellow passengers, a retired minister named Arthur Hammons.  He did an absolutely terrific job considering he had one of the toughest possible audiences, including everything from devout Mormons to even more devout atheists and everything in between.  Ironically, we non-theists were the only ones who stood up to sing the hymns.

(Richard told us the next day that some British newspaper had published a short piece on the fact that he had been spotted in a church, but now I can't find it.)

But by far the best part of Grytviken was the wildlife.  Now that the humans have (mostly) gone, the seals have moved back in, and they are everywhere.  The fur seal pups are the very definition of ridiculously cute, and they are more than eager to pose for the camera: 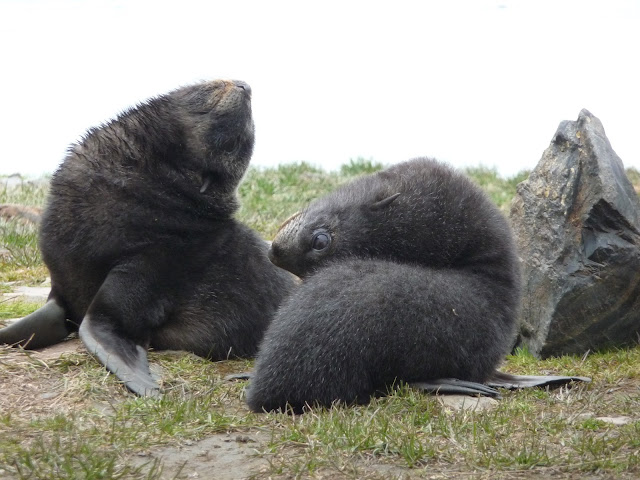 You wouldn't guess it from this photo, but they are also vicious.  Seals are a patriarchal species, and only the alpha males get to mate.  This results in strong evolutionary pressures towards aggression and territoriality, and if you get too close to them even the pups will attack and bite you.  The adults can run faster than humans, and they weigh several hundred pounds so if they catch you they can inflict serious damage.  Happily, they won't attack unless provoked, so you are safe as long as you keep your distance.  But on one occasion I inadvertently got a little too close to one and got a first-hand demonstration of just how fast they can move.

Oh well, I figure if you haven't been blown off a beach in hurricane-force winds and attacked by a fur seal, you haven't really been to Antarctica.

Loving these Antarctica travelogues. That's amazing that Richard Dawkins was there.