I've been slow in posting Antarctica travelogues because I've been busy editing a highlight reel from the two-hour-long DVD they made for us on the ship.  I don't want to post it publicly because it's a little sketchy in terms of copyright, but if you're interested in seeing it drop me a line and we'll work something out.

Anyway, when last we visited our intrepid travelers (which is to say me and Nancy) we were dodging land mines in the Falkland Islands.  We left Port Stanley in the evening and headed out for two days at sea en route to South Georgia island.  There's not much to do on a small boat at sea, so we dealt with the tedium in the traditional manner: we went drinking.

Happily, the observation lounge was just outside our cabin and it was equipped with a bar, so we went to watch the world go by and drown our sorrows (such as they were) in Pisco sours.  There was a woman at the bar we had met earlier, a charming British artist named Lalla Ward, and next to her was a man who bore a striking resemblance to... Richard Dawkins!

Holy shit!  I was stuck on a boat for two weeks with Richard Dawkins!

To jump ahead a bit, we got acquainted and over the course of the trip spent quite a bit of time together.  But that's a whole 'nuther story.  This post is supposed to be about Antarctica, and South Georgia Island in particular.

After a day and a half at sea we got our first glimpse of... well, it's a bit of a misnomer to call it "land".  Shag Rock is aptly named.  It's a rock (actually four of them) sticking up out of the water in the middle of nowhere.

They are covered by shags, (a kind of sea bird for those of you who, like me, think "carpet" more than "ornithology" when they hear the word "shag") hence the name.  Quite possibly the most inhospitable place I've ever seen, but after two days at sea we were ready to take what we could get.

The next morning, after what was ultimately an uneventful crossing, we arrived at South Georgia and anchored at a place called Salisbury Plain, home to one of the largest king penguin colonies in the world.  The wind was blowing pretty hard but that is not at all unusual for that part of the world.

Antarctica is one of the last unspoiled wildernesses left on earth, and the operators that run cruises to this part of the world adhere to a pretty strict set of regulations designed to protect the wildlife.  Our boat had 200 passengers, which made it one of the larger ones to do this kind of trip, and it meant we had to go ashore in two shifts.  When we boarded we had colored stickers attached to our key cards that separated us into the red dot group and the green dot group.  Each day we would alternate, with one color getting the early morning wake up call at 6 AM and the other group getting to sleep in until around 8:30 or so.  We were in the second group to go ashore, and by the time we got there, the wind had whipped up into a pretty serious gale.  It was genuinely difficult to stand upright, and nearly impossible to take pictures.  Even the penguins were getting blown over on occasion. 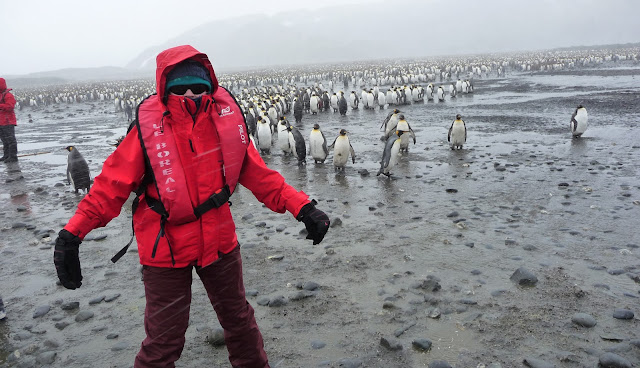 Now, I have to digress and tell you a little bit about penguins.  Penguins are incredibly cool critters.  They are technically birds, but they are well along on the evolutionary path towards becoming fish.  Their forelimbs look more like flippers than wings, and the feathers on the leading edges have evolved to look almost indistinguishable from scales.  (Take that, creationists!)  They have virtually no fear of humans, as you can see from the photo.

They also have no sense of propriety when it comes to defecating.  When it's time to poop, they just let loose wherever they happen to be.  The result, over the course of a breeding season, is a whole lot of fertilizer, and it smells every bit as bad as you might imagine.

So there we are, struggling to walk, trying to take pictures of penguins, trying to take it all in, trying not to get sick from the smell, and I'm thinking to myself: hm, I wonder how bad this has to get before it starts to actually be a problem.

You see, there is no dock here.  The ship is anchored out in the bay, and we get to shore in little rubber zodiacs, which of course means that the only way back to the boat is in those same little rubber zodiacs.  The water is right around freezing, and there are no medical facilities.  I learned later that one person actually fell into the water during the landing and had to be evacuated back to the boat.

We soon found out.  We had only been on shore for about 10 or 15 minutes when we got the word that the landing had been cut short and we were evacuating.  We made it back to the ship without incident, where we learned that the winds had topped out at 70 MPH, very nearly a category 1 hurricane.

We also learned that they have extensive contingency plans, including the option to camp overnight on shore if necessary.  The weather can turn on a dime, and it is entirely possible to get stranded ashore.  And there ain't no four seasons to retreat to.  Antarctica is serious shit in more ways than one.

Holy shit! Richard Dawkins? I sure hope you post more details about that soon!