I am offended by Muslims being offended

An adjunct professor at Hamline University  was fired for showing an historically significant painting of the prophet Mohamed, peace be upon him.  (Note: I did not add PBUH to be facetious.  PBUH is an honorific, like Ph.D.  I added it to show respect to Muslims who believe that Mohamed was in fact a prophet, notwithstanding that I believe they are wrong.)

This is the painting in question: 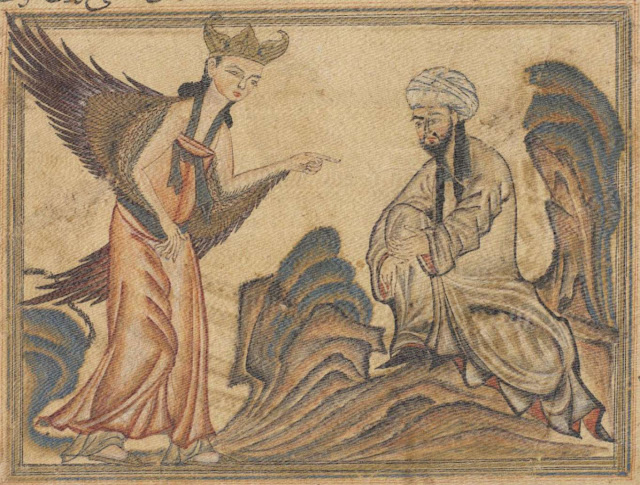 From the NYT article:

The painting shown in Dr. López Prater’s class is in one of the earliest Islamic illustrated histories of the world, “A Compendium of Chronicles,” written during the 14th century by Rashid-al-Din (1247-1318).

Shown regularly in art history classes, the painting shows a winged and crowned Angel Gabriel pointing at the Prophet Muhammad and delivering to him the first Quranic revelation.

Much ink has already been spilled debating the merits of Hamline's actions and I don't have much to add, but there is one thing that I haven't seen anyone point out yet: this is not a painting of Mohamed.  This painting was made centuries after Mohamed died.  The artist had no idea what Mohamed actually looked like.  No human who was not alive in Mohamed's time knows what he looked like because there is no record of what he actually looked like.  The image above is either a likeness of a contemporary (to the artist) model, or a product of the artist's imagination.  This is an image that the artist imagined to be a likeness of Mohamed, but actually isn't.

If you think that is a reasonable thing to pander to, well, then I am offended by you.  Again, I am not saying that to be facetious.  I am sincerely offended by your belief that I have an obligation not to offend you.  And now we have a problem: should my offense be sufficient cause to make you lose your job because you want me to lose my job for having offended you?  Because if your answer is yes, then we are headed for 100% unemployment.  No one will be able to work anywhere if a necessary condition for keeping your job is to not say or do anything that offends anyone.

On the other hand, if you think your offense is somehow privileged, that you should get to keep your job despite having offended me while I have to lose mine for having offended you, now we have a different problem: you now have to provide some justification for what makes your offense so much more worthy of accommodation than mine.  And you cannot ground your justification in religion because a belief in freedom of expression is part and parcel of my most deeply held beliefs.  The only way you will be able to justify your privileged position is to argue that your deeply held beliefs should trump mine for some reason.

(Aside: freedom of expression definitely does not mean that a private entity cannot exercise editorial control over what appears in venues it controls.)

There are only three alternatives here: either Muslims are elevated to a privileged position where their offense trumps everyone else's, or they have to be told by society to suck it up, or we enter a death spiral of social paralysis where no one can do or say anything out of fear of offending someone.

Figuring out which alternative I would advocate is left as an exercise for the reader.

I think this is a narrow and literal-minded reading of what is meant by "likeness". I think offense is taken at the depiction of Muhammad by virtue of intention and the symbolic representation. Historical figures have been depicted in art many times with no regard for what they actually looked like. The intent is not to depict them as they actually looked, but to represent them symbolically. You might as well argue that a Byzantine icon of Jesus isn't really depicting Jesus because Jesus didn't look that way, which is an absurd claim.

That being said, I do disagree with the firing. But it does go to show that the neutral ground that liberalism purports to offer is a myth. To quote Edward Feser[0]:

> You might as well argue that a Byzantine icon of Jesus isn't really depicting Jesus because Jesus didn't look that way, which is an absurd claim.

Why is it absurd? If Jesus was a real person (which is far from clear BTW) then he looked like something, and if Byzantine icons don't look like he looked then they don't depict him. They depict someone's (objectively false) idea of what Jesus looked like.