Game over for Hong Kong


Early Wednesday, under a heavy police presence and before any public announcement about the matter, officials inaugurated the Office for Safeguarding National Security of the Central People’s Government in the Hong Kong Special Administrative Region at a ceremony that took place behind water-filled barricades. They played the Chinese national anthem and raised the Chinese flag, although local media weren’t invited. When the ceremony was over, reporters were finally able to photograph the building’s front door.


The Metropark Hotel on the edge of the city’s Causeway Bay district will be the initial base for the new agency, staffed by Chinese security officials. It will be tasked with collecting intelligence and implementing a new law that sharply curtails political freedoms as Beijing takes greater control of the territory after anti-government protests last year.

It’s the first time the Chinese government’s state security apparatus has been permitted to operate in Hong Kong, marking a milestone in officials’ efforts to dismantle the firewall that separated the city from the authoritarian mainland.

This is what the Metropark Hotel's web site looked like this morning: 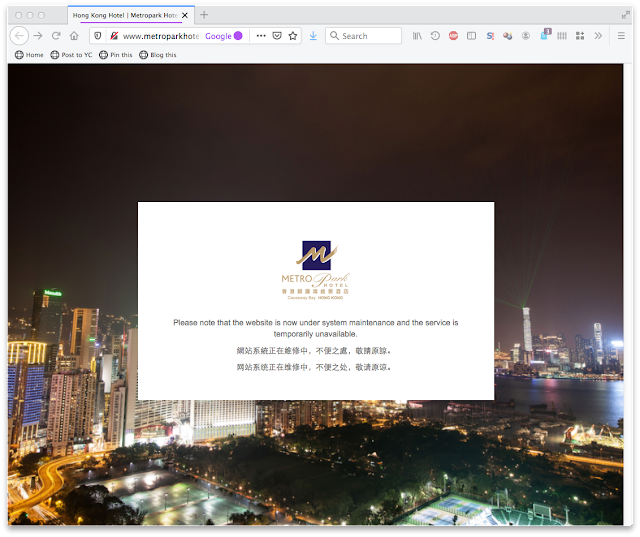 Just in case the type is too small to see: 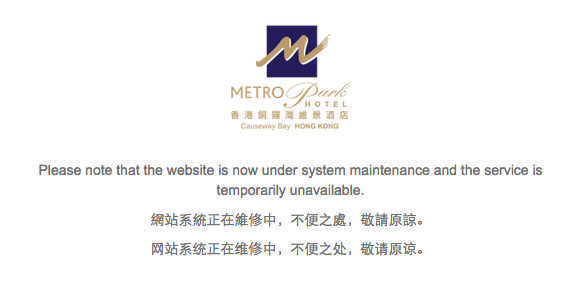 This is what the death of Democracy looks like in the 21st century.  As T.S. Eliot presciently observed, it does not end with a bang, but with an under-construction notice on a web site.
Posted by Ron at 7/08/2020 10:21:00 AM