Fedex: when it absolute positively has to get lost twice in a row

Last August I sent a package from California to Colorado via Fedex.  It never arrived and we never got it back despite jumping through all kinds of hoops to open an account so they would send it back.

I vowed I would never voluntarily do business with Fedex again, but last week, to my regret, I broke that promise.  We finally got our generator transfer switch installed so it was time to get a generator.  I decided to get an Onan p4500i and happily there is a dealer down in Santa Cruz which is about 50 miles south of us.  Unfortunately, when we got there we realized that the generator was just a little too big to fit in our car.  We probably could have squeezed it into the back seat, but there just happened to be a Fedex truck right there, and the cost to ship it turned out to be fairly reasonable so I decided to go for it.  It was only 50 miles.  The tracking estimator said it would arrive the next day.  What could go wrong?

Because I didn't trust Fedex, I took a photo of the shipping label attached to the box just in case.  Here it is: 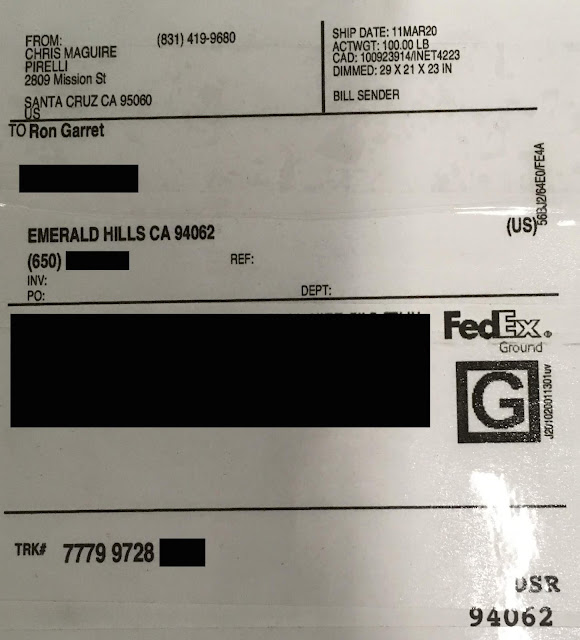 Notice that the destination address is in Emerald Hills, CA, the zip code is 94062, and the ship date is Wednesday, March 11.

On Thursday, I checked the shipping status.  Here is what I saw: 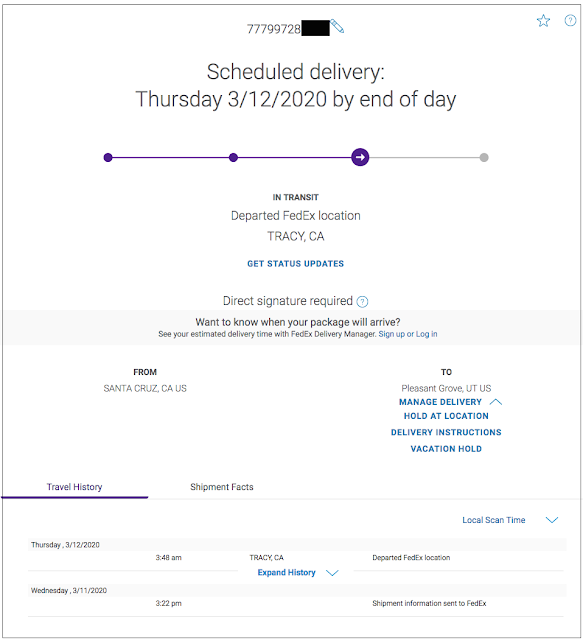 OK, still on track to be delivered today, but why did they send it to Tracy?  That is out in the central valley, almost 100 miles out of the way.  (See if you can spot the answer.)

Look at where it says the package is being sent to now: Pleasant Grove, Utah.  That's outside Salt Lake City, about 800 miles away.  It turns out that the zip code for Pleasant Grove is 84062.  Someone had apparently entered the destination zip code manually, and gotten it wrong by one critical digit.

This begs the question: why is anyone entering the destination zip code manually at all?  Don't they just scan the bar code?  And why was there no alert that told whoever entered the wrong zip code, "Um, this is not what it says on the shipping label.  Are you sure you got this right?"  (Of course I harbor no illusions of ever learning the answer to those questions.  I'm just stuck at home trying to avoid the corona virus (again) and so I have nothing better to do than to ponder the unanswerable questions of the universe, like why Fedex can't deliver a package to a destination 50 miles from where it was shipped.)

On Friday I got a call from Fedex.  The CSR said that the package had been located, the destination corrected, and it would soon be on its way back.  And indeed at the moment their system says it's due to be delivered today: 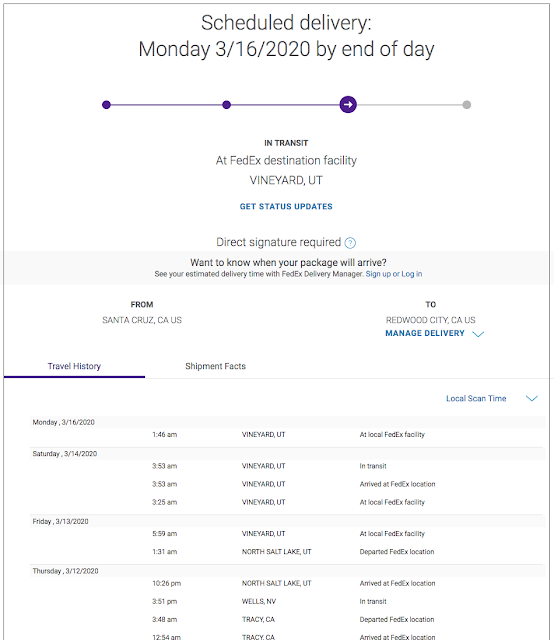 Of course, it also says that it's still in Utah so I'll give long odds against it actually making it on time.  Notice that it has been in Vineland, Utah, just outside Salt Lake City, since 6AM on Friday.  As I write this it is almost 3PM on Monday and the package hasn't moved.  I called Fedex again and they told me it would arrive somewhere in California on Wednesday, but frankly I would not be a bit surprised if it is never seen by human eyes again.

[UPDATE] The generator was finally delivered today, March 21, ten days after it was shipped.  During that time we had yet another Fedex screwup: a box of light bulbs that I ordered showed up as having been delivered when in fact they had not been.  Fortunately, I noticed this right away and called Fedex and they were apparently able to contact the driver and have him go back to wherever he had mis-delivered it to and bring them to us later the same day.  Still, Fedex is now 1 for 4 (we had one successful delivery the day before) on our last four shipments.  That is not a good track record.

To give credit where it's due though, I have to say that their front-line CSRs are quite good.  They were always friendly and helpful, and except for one occasion yesterday (Friday) evening when I gave up after waiting for 40 minutes, I never had to wait on hold to talk to one.  Still, if I ever need to ship stuff, I'm probably going with UPS.
Posted by Ron at 3/16/2020 02:44:00 PM