Travelogue: What's up with the splatty toys? 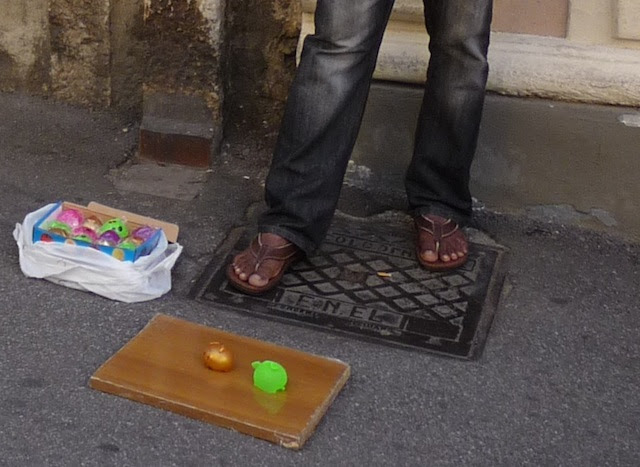 It's a toy that consists of a sphere of jello-like material. You throw it against a flat surface where it lands with a splat! and spreads out into a thin film. Then over the course of the next 10-20 seconds it slowly creeps back to its original spheroid shape. Some of them have little appendages like eyes and a nose so that they look kinda sorta like a face.

That's it. That's all these things do. Splat! Creeeeeeeeeee....eeep. There's not a single place we've been to that hasn't had at least one guy -- more often several -- standing there throwing these things at a board laying on the ground over and over and over again. I can't imagine what the appeal is. I have never seen anyone actually buy one. And yet we've seen dozens of people apparently trying to make a living by selling them, so the actual number of splatty-toy resellers is certainly much higher -- probably hundreds, perhaps thousands. How big could the market for these things possibly be?

Bro
there are tons of silly things like that in the US that sell and have made some very rich - just has to catch on and be "trendy" and hip.... maybe the tourists don't buy them but locals for their kids? You should ask the "natives". I'm having fun traveling vicariously via your blogs - love them and the pictures! And you still have time to blog about our nonexistent Democracy :-)
don't forget to bring back gifts for your family of course - just not one of those little creeeeee....eeep toys!

I did avoid the dog poop ones, and got the egg and the tomatoe.

From this description, I immediately want one one of these. You have marketed it to me successfully, and you did not even have to wrap it in a religious myth!

P.S. speaking of jelly that goes splat, if you're ever having "bubble tea", consider that those tapioca "pearls" can be very effectively shot out the straw using air compressed by your lungs. They can travel a considerable distance, and then stick to a vertical surface and slowly creep down. Good aim is possible with practice.