A glimpse of the future

The future seems to arrive in the Silicon Valley before the rest of the world, which is why although I make my home in Los Angeles, my heart lives in Palo Alto (and it commutes to Mountain View). So every six months for the past couple of years I make a pilgrimage up north to attend Y Combinator demo day. Lately the event has gotten so popular that they repeat it two days in a row so that all interested people can attend.

This past week I was able to attend both days, once in person, and once by robot, courtesy of Trevor Blackwell's AnyBots and their new QA telepresence robot. It's like a remote-controlled Segway but made with a controller designed by Trevor. With a sleek-looking white body, it looks like something straight out of the Jetsons but without the cheese.

Although there were quite a few rough edges (mainly having to do with connectivity problems) I came away quite impressed. In particular, I was surprised at how usable the system was even with the glitches, and how much being able to move around added to the richness of the experience. It wasn't quite like being there (couldn't help myself to the buffet) but it was much closer than I was expecting.

The most interesting thing about the experience was how much more aware I suddenly became of my sensorimotor limitations than I am when I'm on, say, a phone call, or watching a video feed, or even in a teleconference. I don't know how much of this was due to novelty and how much will remain over time, but on occasion when we lost the video feed I actually felt the same kind of visceral reaction that I would have if someone had put a blindfold over my eyes. When we needed to switch off my ability to control the robot so that it could be manually moved around, I felt like a gimp in a wheelchair. When I was able to move the robot in front of a mirror (not an easy trick -- there was a three-second round-trip communications delay that made precise positioning very tough) I felt in a weird transitive sort of way that I was looking at myself for the first time. 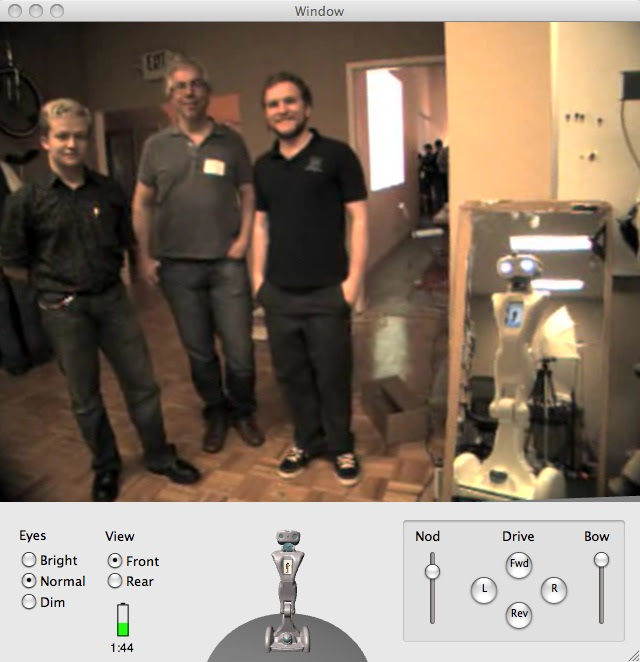 That's "me" on the right, along with the Anybots crew: Daniel Casner, Trevor Blackwell and Benjie Nelson (from left to right).

Some refinements are certainly needed before it's really ready for prime time, but it wouldn't surprise me a bit for these things to be in common use five or ten years from now. Who knows, maybe in 20 or 30 years when we run out of jet fuel we can "travel" through these avatars instead. Maybe by then they will have figured out how to transmit smells and flavors over the internet as well as sights and sounds so it can really be just like being there.
Posted by Ron at 3/19/2009 03:14:00 PM

That's very cool, Ron. Here's hoping Trevor and crew are able to get it down to few years rather than five to ten years!

We're building a similar, albiet more crude, network of mobile platforms focused on recording/webcasting/telepresence at Bucketworks. We call them wikibots because they allow us to enter information into a shared editable space easily.

I'm quite proud of my prediction from 8 years ago that telepresence will displace business air travel. One point I've seen nowhere else is that capital investment is not as geographically diversified as portfolio theory advocates. One reason is the time and expense of travel. Investment opportunities all over the globe are passed up because they are too risky to do at long distance. Companies that offer foreign investors easy access via a telepresence can tap new sources of capital. Banking will become more "hands on", with loans divided into more, and smaller stage payments. Physically dangerous countries will no longer be off limits for lenders. When you visit by telepresence you are still safe in your office.