Little Mombo was the last of our three stops in the Okavango, and by far the best.  I took over 600 photos here alone (out of over 6000 over the course of the entire trip).  When I was going through them to pick the best of the best to include in this blog entry I ended up with over 30, so brace yourselves.  This is going to be a long entry.

(BTW, Little Mombo and regular Mombo are marketed as two separate camps, but they are really the same facility divided into two areas that you can easily walk between.  This is unlike Vumbura Plains and Little Vumbura which are two completely different facilities.)

As you will recall, in our previous two camps we had rain.  In fact, at our first stop we had rain so hard that it soaked the inside of our tent and destroyed my computer.  The distance between our previous stop and Little Mombo was not that great, only about 20 miles.  So we were more than a little surprised to see a substantial brush fire burning not that far from the camp. 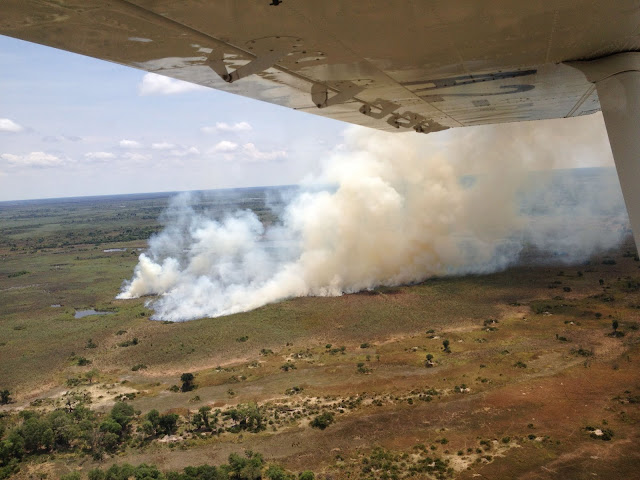 It had apparently been sparked by lightning from the previous day's thunderstorm.  And of course there is no fire department out here.  When a brush fire starts, it burns until it rains.

That fire burned the entire time we were there.  Most of the time it wasn't a problem, but on a couple of occasions the wind shifted and blew the smoke straight into camp.  As someone who has lived through a brush fire before, it made for a somewhat tense three days, particularly since we were so far from civilization.  None of the staff seemed worried, though, so that helped.  It turned out there as a branch of the river between us and the fire, but that may or may not help if the wind picks up.

But to make up for the fire, we had by far the best three days of our entire trip.  The first thing we did was get some lunch, and there was an elephant there to greet us. 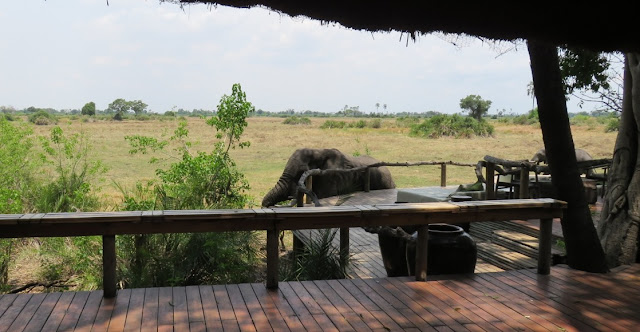 And then he came closer. 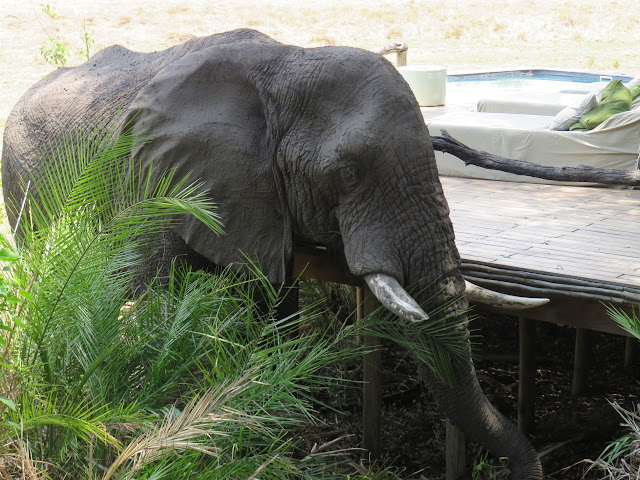 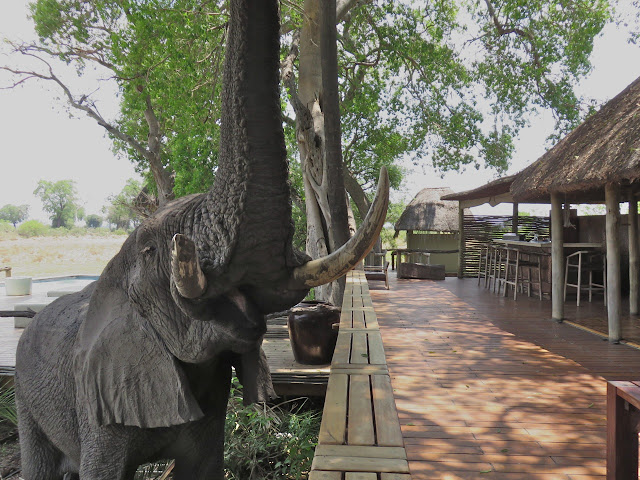 And then he got ridiculously close. 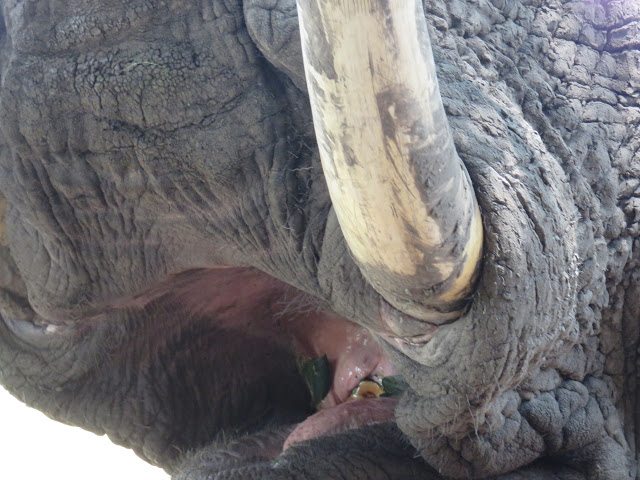 He was so close he could easily have reached out and picked me up with his trunk.  If you've ever wondered what the inside of an elephant's mouth looks like, well here you go: 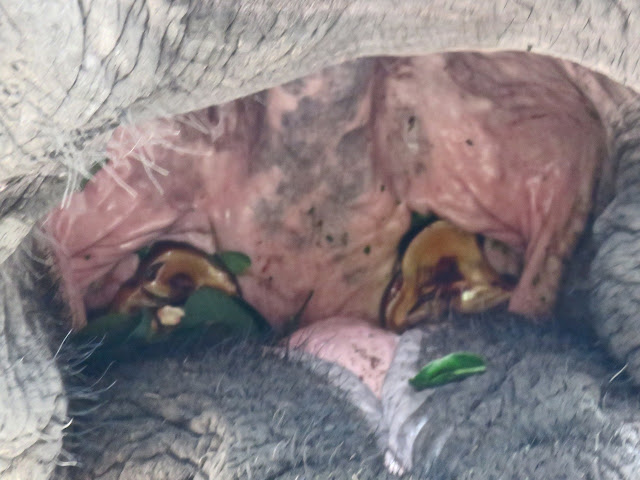 All that happened in the first hour, before we even got to our tent.  Which was very, very nice. 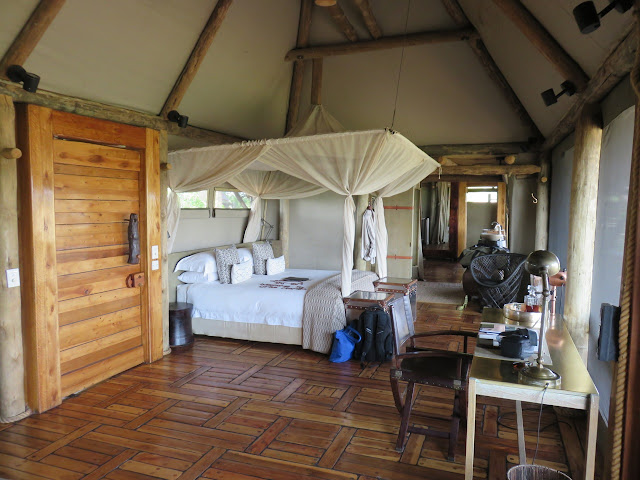 The whole camp was absolutely spectacular. 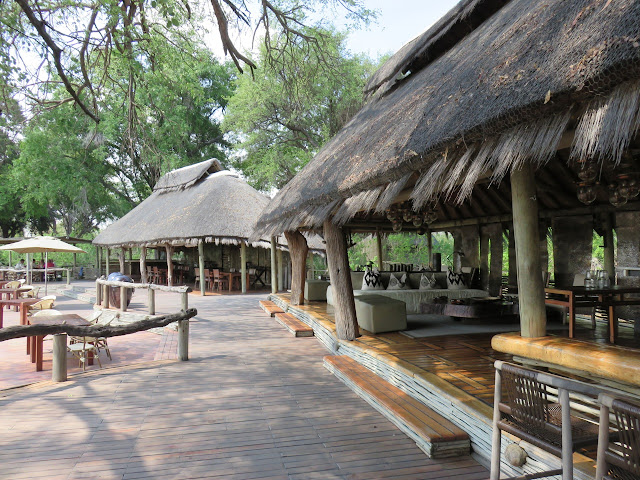 There was even a gym, though who would want to work out in the 100+ degree heat I'm not sure.  The entire time we were there I didn't see anyone there. 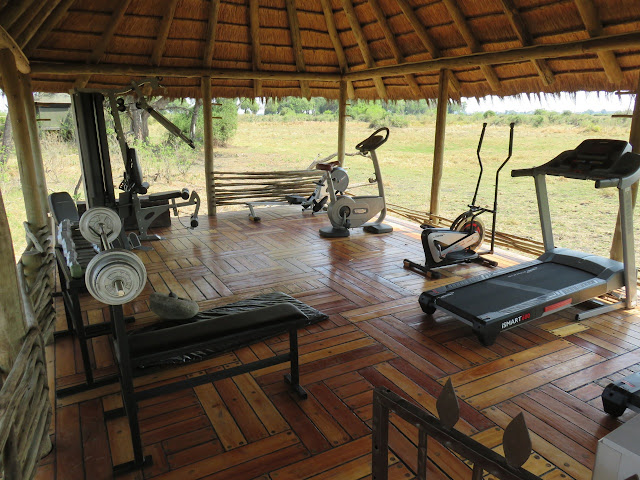 And the only ones that I saw using the pool were the baboons. 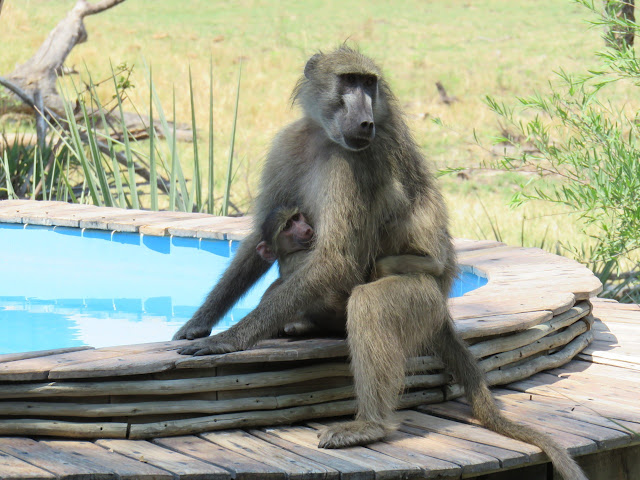 On our first game drive, our guide, whose name was Moss, surveyed the landscape with a pair of binoculars and suddenly got very animated and excited.  "I think I saw a rhino," he said.  Rhinos have been hunted very nearly to extinction in Botswana, but recent restoration efforts have seen the beginnings of a comeback, so this was exciting news.  Moss gunned the engine and for the next half hour or so we tore across the landscape at a pretty scary speed, with Moss proclaiming every few minutes, "I think I saw a rhino!"  We went so far that I would have given long odds against just because there was no way he could have seen anything so far away.  And yet, sure enough, there was a rhino. 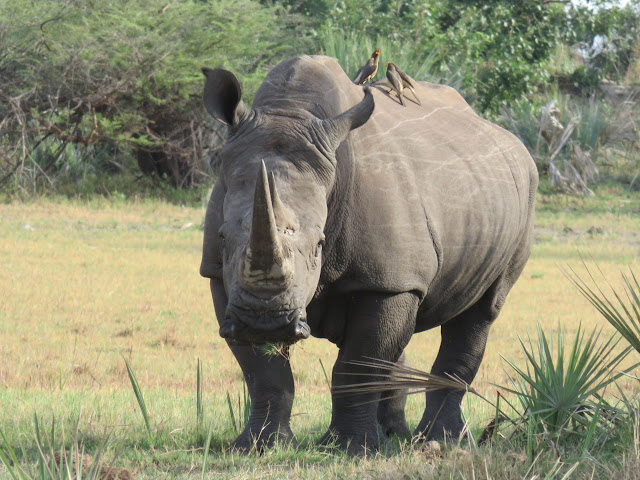 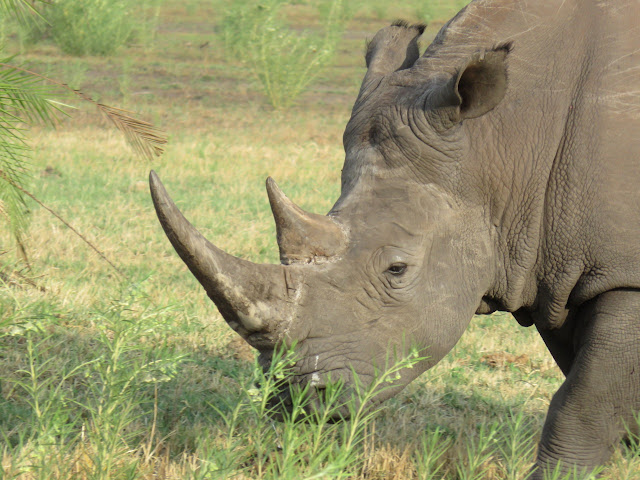 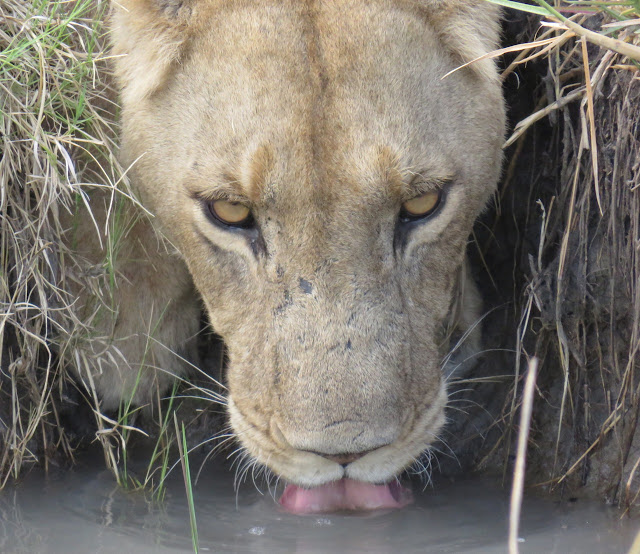 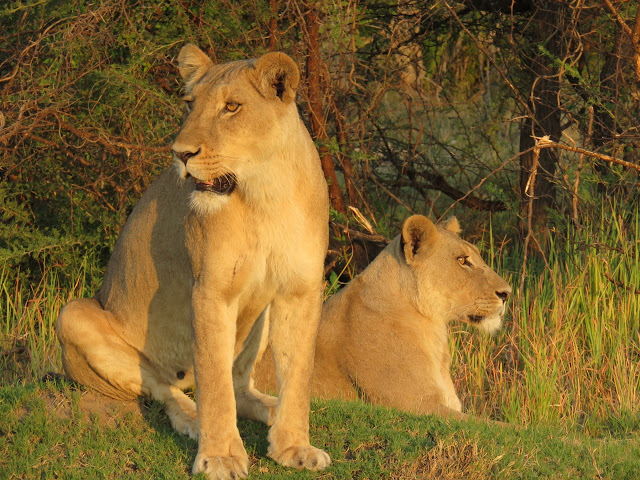 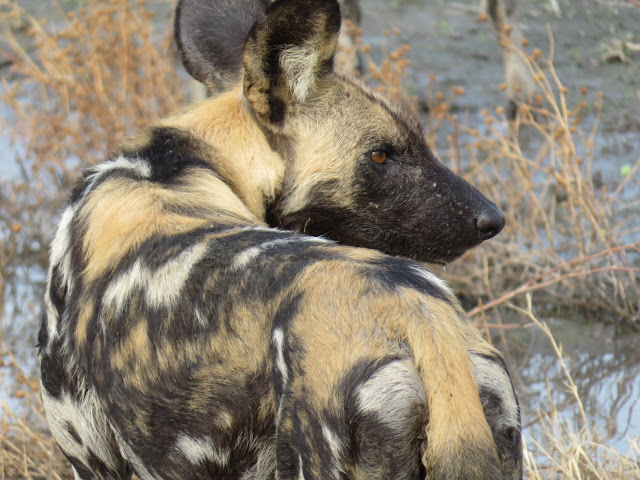 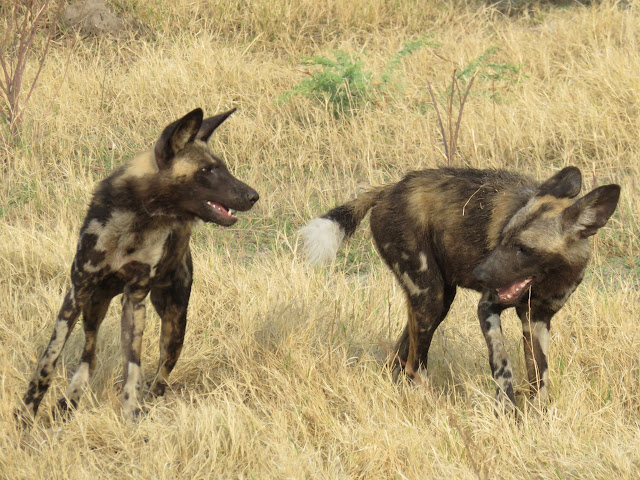 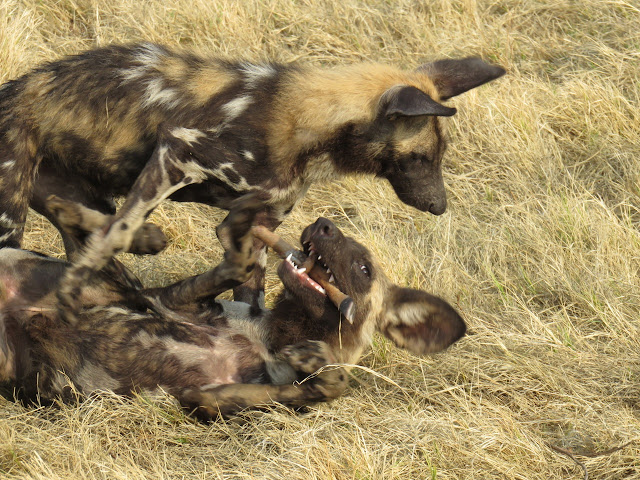 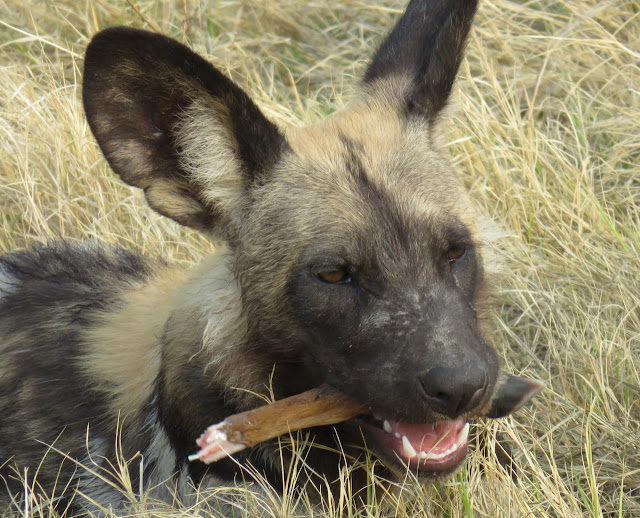 And hyenas eating an elephant: 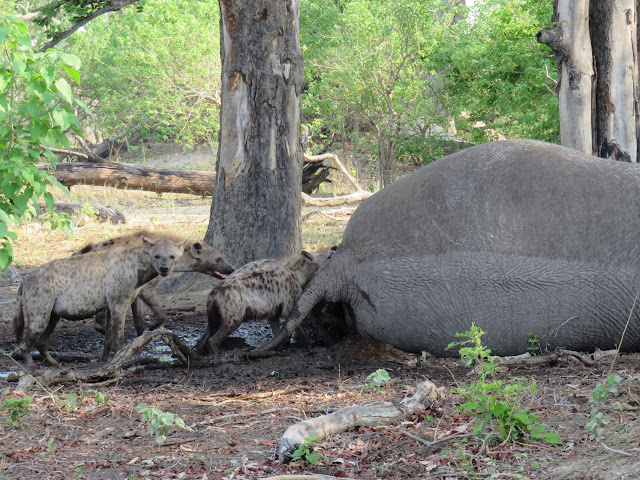 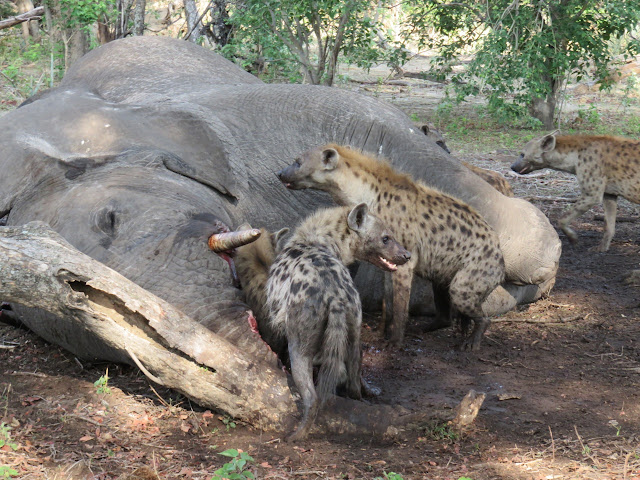 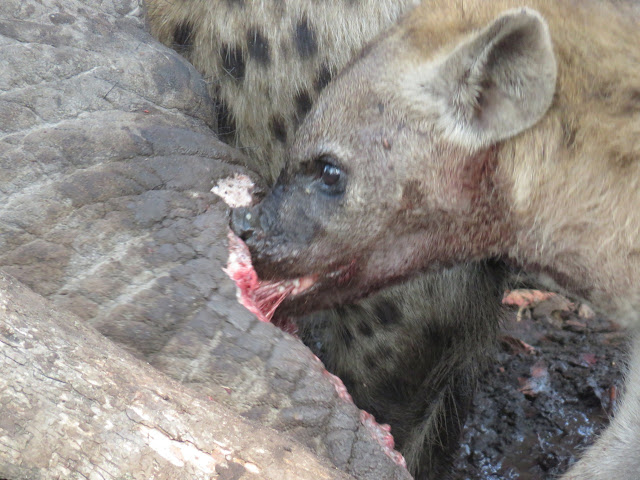 The elephant almost certainly died of natural causes because its tusks were still intact.

Giant eagle owls.  It's rare to see them.  We saw three.  Together. 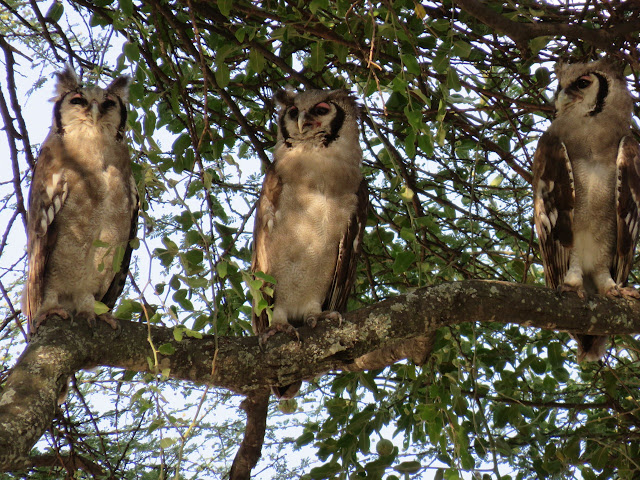 A southern ground hornbill, the largest hornbill in the world. 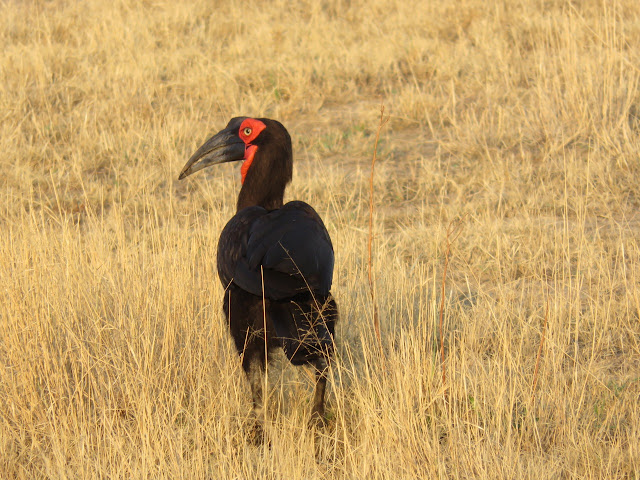 An impala with a broken horn.  That's gotta hurt. 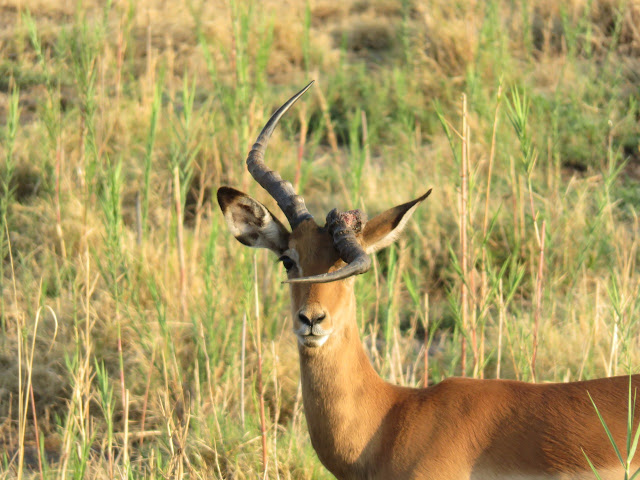 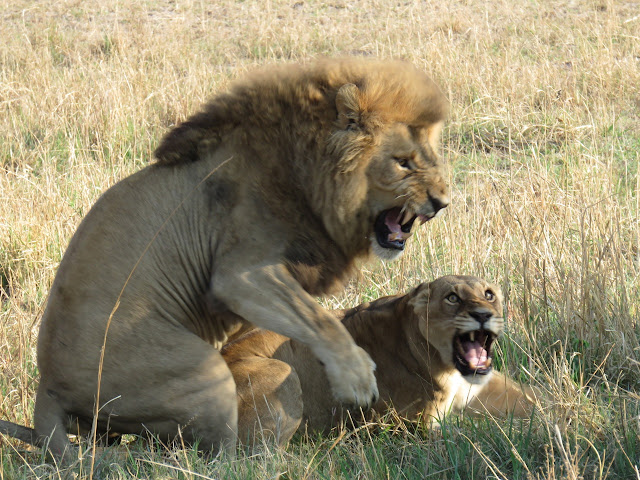 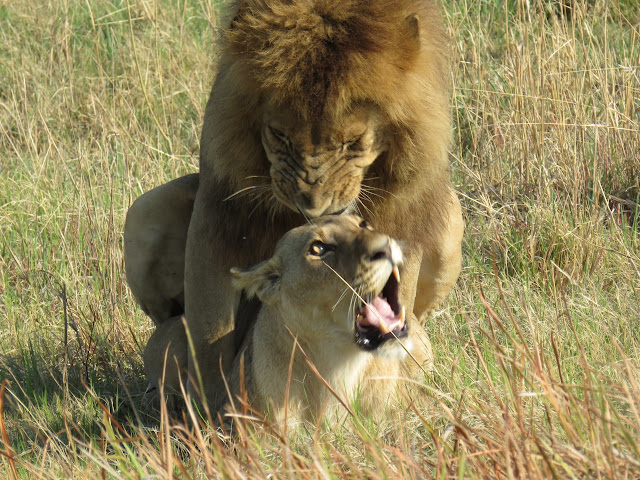 Zebras are common, but quite skittish, so it's unusual to get this close. 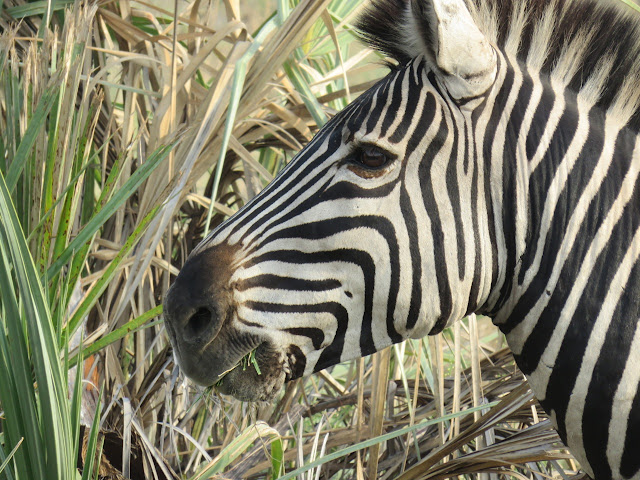 The silver lining of having a brush fire nearby was some spectacular sunsets. 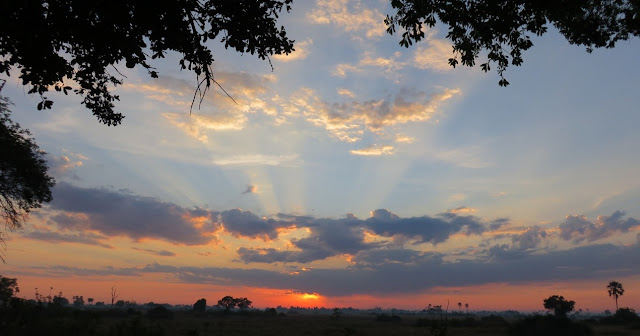 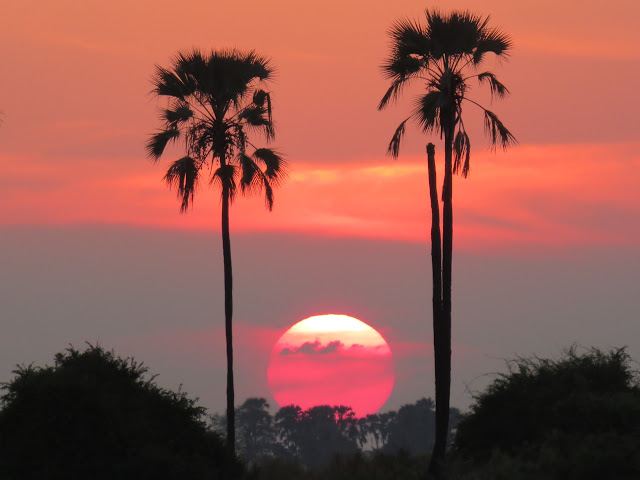 A married couple that are friends with my parents have an interesting story about an elephant.

The husband was stationed in Vietnam during the Vietnam war; he and his wife got some leave and took a trip to Penang, Malaysia. He had just gotten a new SLR camera, which he took along to take pictures of the trip.

They visited the zoo on Penang Island.

They came to an exhibit of a large snake. There was a sign, "TAKE YOUR PICTURE WITH THE SNAKE". Well, she didn't much care for snakes, so they passed on that opportunity.

They came to the elephant exhibit. There was a sign, "TAKE YOUR PICTURE WITH THE ELEPHANT". OK, she posed with the elephant, he he started fiddling with his camera to take the picture. No auto-exposure systems for those cameras, and it was new to him, so he was fiddling for it a good bit. Suddenly, the elephant shook it's head and hit the wife with is tusks, which threw her about 10 feet.

At the hospital, they were talking with the doctor, who asked what happened. They explained they went to the zoo and there was a sign, "take your picture with the elephant," and that the elephant had struck her, etc.

The doctor replied, "Huh, we usually see people with snake bites from the zoo."