From Victoria Falls we were supposed to fly to Kasane, Botswana, where we would get on a small bush plane to fly into the Okavango delta.  But on our way to the airport our driver got a call that our flight had been cancelled due to bad weather.  You didn't have to be a pilot to know that this was total BS.  Yes, there were a few clouds in the sky, but it was still an easy VFR day.  Most likely, our driver said, the pilot just decided he wanted to take the day off and go fishing or something.  Happens all the time, he said.

Plan B was to drive to Botswana, which was fine because it actually wasn't very far, only about an hour or so.  The only tricky part was that our driver wasn't allowed to cross the border, so we had to change to a different car.  But we made it in plenty of time to catch our connecting flight. 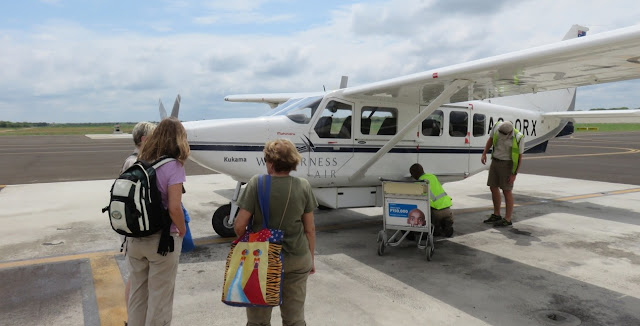 Despite the fact that we were getting on a Cessna Caravan headed for the middle of nowhere, they still made us go through the standard security procedures for a regular commercial flight.  Post-9-11 security theatre has infested the furthest reaches of the globe.

We flew from Kasane to Duma Tau ("roar of the lion"), the first of three camps we would be staying at in the Okavango delta.  (BTW, Wilderness Safaris, which runs the camp, has one of the best 404 pages on the internet :-)  Unfortunately, I don't have very many photos of the camp itself (the camp's web site has a nice gallery).  The reason for this is that on our first day there we had a bit of an, um, incident.  To set the stage for this story, I have to tell you a little bit about the layout of the camp.

Duma Tau has about a dozen tents laid out in a line along the shore of an estuary.  Well, OK, it's not technically an estuary since it doesn't connect with the ocean.  But the whole Okavango delta doesn't connect with the ocean, so all the nomenclature gets a little weird in there anyway.  The Duma Tau web site calls it a lagoon, but that's not really right either.  Maybe it's a lake.  In any case, the tents are stretched out along a shore line, with a central common area in the middle.  The tents are all connected by a boardwalk, and they're spaced pretty far apart.  At the far end of the boardwalk is a small swimming pool that also looks out over the estuary/lagoon/lake/whatever-the-heck-you-want-to-call-it.  From the central area to the pool is quite a hike, nearly a quarter of a mile.

The routine at these camps is to wake up at 5AM (!), go out for a morning game drive, come back around 10 or 11, have lunch, and then take a siesta until about 4.  It can get beastly hot in the afternoon and the animals mostly just try to hide in the shade so there's not much to see.  Our first full day there was typical, so after lunch I decided to go take a dip in the pool.  The sun was shining, it was nice and toasty, and the tents don't have air conditioning, so it seemed like the thing to do.  And it was.  For about half an hour.

It was the most dramatic change in the weather I have ever seen in my life.  First the sun went away.  Then it started to rain.  Within five minutes the wind was blowing so hard that I wasn't sure it would be safe to get out of the pool.  There were two large beach umbrellas on the pool deck; the wind picked them both up, turned them inside out, and deposited them about ten yards from where they had been.  My guess is that the wind was probably blowing about 50 knots.

And then I remembered: our tent was open.

Now, the tents at Duma Tau are not your ordinary camping tents.  They are semi-permanent structures built on wooden platforms with very heavy-duty wooden frames and covered with industrial grade canvas.  But they are still tents.  And most of the time in the middle of the afternoon the problem is not rain but heat, so the walls of the tent can be rolled up to let air in (there are floor-to-ceiling screens to keep the bugs out).  Which is the configuration our tent was in.

Only two of the walls were open, but they were facing in exactly the wrong direction, into the wind.  When I got to our tent it looked like someone had taken a firehose to the interior.  Everything (and I mean everything!) was soaked.  The floor.  The walls.  The ceiling.  The bed.  The towels.

The camps don't have air conditioning, but they do have enough electricity to run light bulbs and chargers, so we travel with a sizable collection of electronics: cameras, laptops, phones and their associated chargers, adapters, dongles, dingles and miscellaneous accessories.  They were all laid out on the little desk in the center of the tent.  And they were all soaking wet.  We were hosed.  Literally.

Fortunately, some spare towels in a cabinet had been spared so I grabbed one of them and started toweling off the various gadgets.  Fortunately, everything actually seemed to be OK.  My computer was even still working despite the fact that it was soaking wet, but I knew better than to take too much comfort from this.  It can take some time for water to do its bit, so I shut everything down, set up a fan to blow on it, and prayed to whatever gods might be out there to spare my poor little computer who had never hurt anyone in its life and deserved to live.

Meanwhile, the entire camp was a minor disaster area.  All of the major structures had held, but so much rain had come down in so short a time that many of the roofs were sagging under the weight of enormous bulges of water.  Most of these could be drained by pushing up on them from below, but some were so heavy that this wasn't possible and the staff had to dismantle the tent in order to get the water out.  And of course there was debris everywhere.

The staff was amazing.  They just hunkered down and cleaned it all up, and within a few hours it was as if nothing had ever happened.  They moved us into another tent (which had been closed up — and hence dry — because it was vacant).  It was all done in time for afternoon tea.

So we went out on the evening game drive and saw some amazing wildlife.  This is just a brief highlight reel; I took over 800 photographs just at Duma Tau alone (my motto was: film is cheap, so shoot first and ask questions later.)  I'm making these smaller than usual so this post doesn't take up so much space.  Click on the photos to enlarge them. 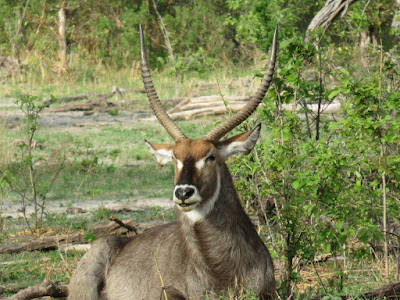 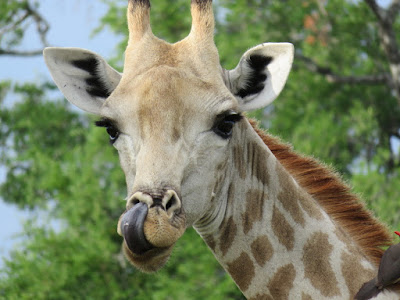 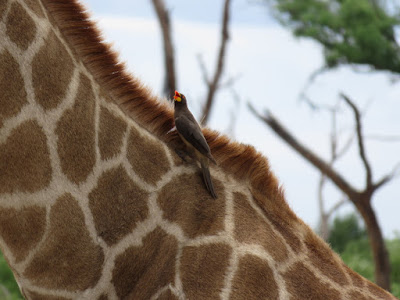 An oxpecker.  They hang out on the large herbivores and eat the parasites that live in their fur. 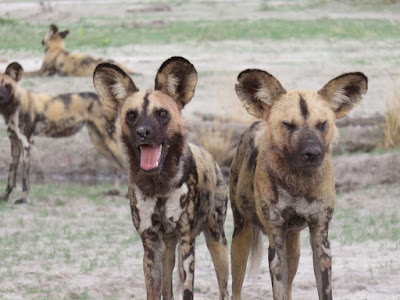 Wild dogs.  It's rare to see them because they are endangered. 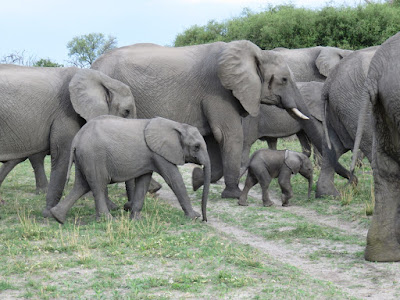 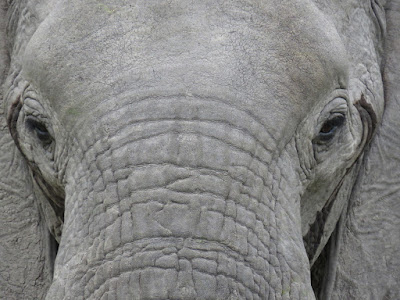 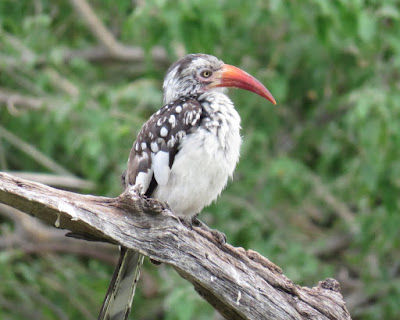 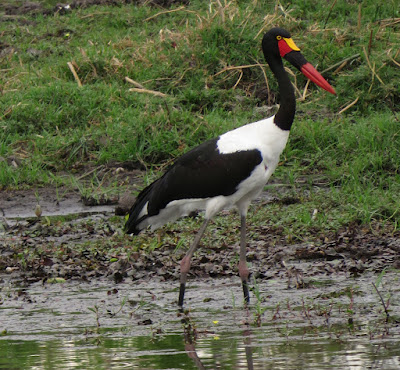 Saddle-billed stork.  It's hard to tell from this picture, but this bird stands about five feet tall.  Their wingspan ranges up to nine feet. 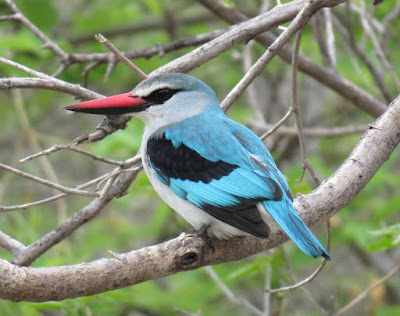 A woodland kingfisher.  There are a ridiculous number of different kingfisher species in the world. 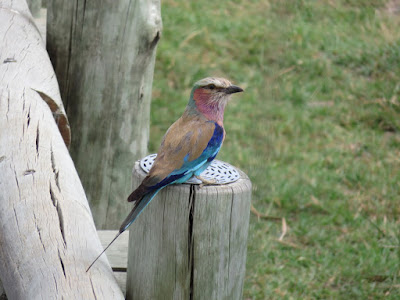 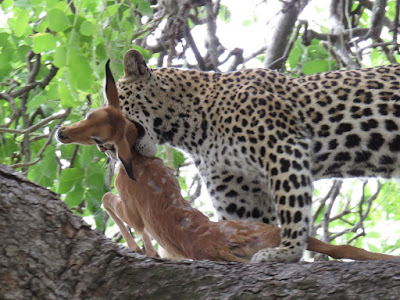 A leopard with a freshly killed baby impala (a.k.a. leopard chow). 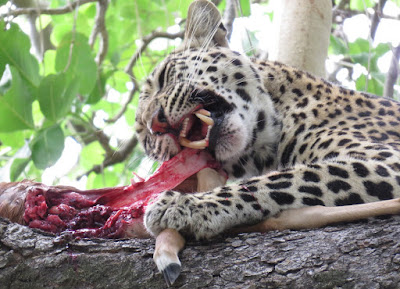 Red in tooth and claw. 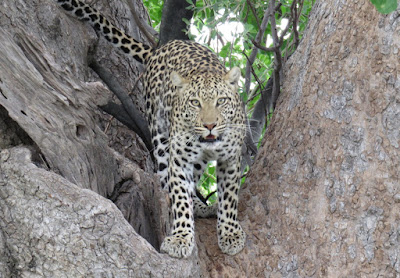