Our flight from Quito to the Galapagos left at 7AM, which doesn't sound too unreasonable except that we had to be there two hours ahead of time, and it takes an hour to get from Quito to the new airport.  So we had to get up at 3 to catch our ride to the airport at 4 to be there by 5.  We're not morning people, so by the time we boarded our flight we felt like walking zombies.

Then our flight was delayed.  Problems with the lavatory.  Great, I thought, we're about to be stuffed into a cramped, broken-down regional jet without working plumbing.  But when we actually boarded about 30 minutes later it was a brand-spanking-new Airbus A320.  There were only about 20 of us on board.  I thought that the airline was going to lose a lot of money on this flight, but we made a stop in Guayaquil where we picked up about 100 more, which filled the plane.  Still, it was a very pleasant flight.  We even got lunch!

I was surprised to learn that the Galapagos are actually inhabited.  I thought the entire archipelago was a national park, but it turns out there is a resident population of about 20,000 occupying about 3% of the land spread out over three of the islands.  The largest town is Puerto Ayora, on Santa Cruz island.  Ironically, the main airport is not on Santa Cruz, but rather on nearby Baltra island, which is not inhabited.  Baltra is separated from Santa Cruz by a narrow channel which can only be crossed by ferry.  There is a small port on Baltra, but for reasons I was never entirely clear on our boat was not docked there.  In fact, our boat wasn't docked anywhere.  It was moored in Puerto Ayora.  (As far as I can tell there are no actual docks in the Galapagos.  The only way to get back and forth is by zodiac.)  So once we landed on Baltra, we had to take a bus to the ferry, then another bus to Puerto Ayora (by way of a detour to look at giant tortoises), then a zodiac to the boat.  And our bags had to make the same odyssey of course.  It was by far the most complicated set of transfers I have ever made in a single day. 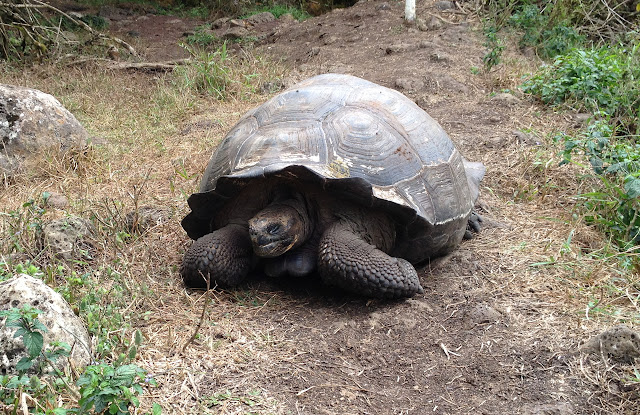 But we made it.  And so did our bags.

This was our home for the next week, the Cormorant.  By the time we got on board it was 3PM, too late to do any tours but too early for dinner, so they gave us a couple of hours to wander around Puerto Ayora.  It's a charming town.  It takes all of about 15 minutes to walk the central district from one end to the other.  Even here in the center of town it was teeming with wildlife.  There were pelicans roosting in the trees, and sea lions snoozing on the zodiac docks. 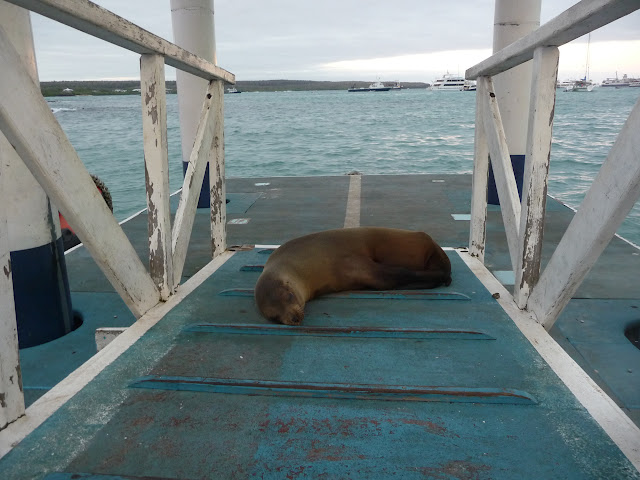 We visited an internet cafe where we checked on our email for the last time, and took in a beautiful sunset.

Then we headed back to the boat and slept like bricks.