One of the  more annoying aspects of the cruise was the schedule.  There were 200 passengers on the ship, but because of environmental regulations only 100 could go ashore at once, so we had to go in shifts, and they would try to get in two landings a day.  So the early shift was pretty frickin' early, at least by my night-owl standards.

Trick is, they would broadcast a wakeup call over the loudspeaker into our cabins in the mornings, but they had no way of selecting which cabins got the announcement.  Everyone was awakened bright and early whether or not we were on the first shift.  So after we left South Georgia heading out across the Southern Ocean I was really looking forward to sleeping in.  We had two days at sea before reaching Elephant Island.

So I was pretty frickin' annoyed when at 6AM on the first day the captain came on to loudspeaker and said, "Ladies and gentlemen I apologize for waking you up but we are approaching a very special iceberg.  You really should get up and have a look at it."

Are you fucking kidding me?  We're heading to Antarctica.  Icebergs are going to be a dime a dozen.  This had better be the best damned iceberg the world has ever seen.  Grumble grumble.

I dragged myself out of bed and over to the window.

It was a mile wide, and as you can see, it had spectacular arches around the entire perimeter. 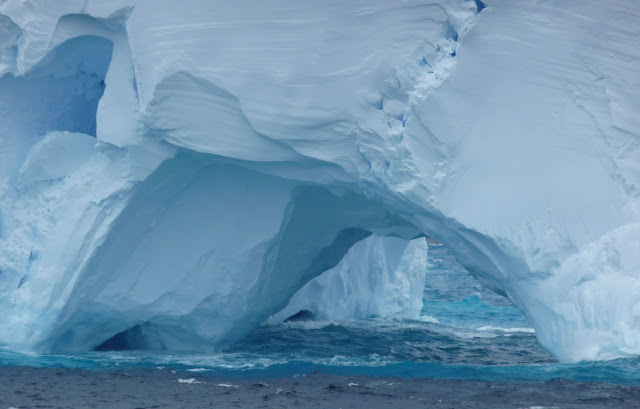 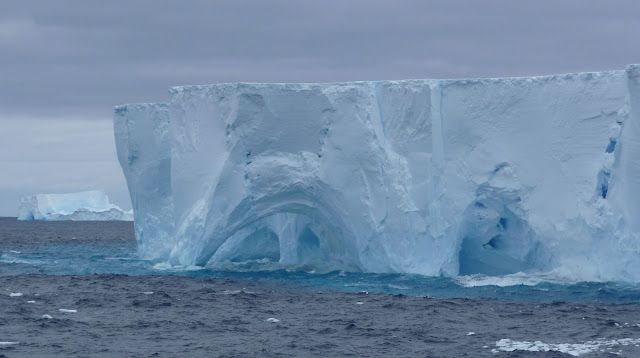 I said to Nancy, "You really should have a look at this.  It's worth getting up for."

But the captain didn't leave her a choice.  A few minutes later he came on the PA again and said, "You need to get up to see this iceberg.  This is the most spectacular iceberg I have ever seen.  You can sleep when we get back to Ushuaia.  I can hardly contain myself!"

Yes, he really said that.  I wanted to nominate him for Coolest Captain Ever.